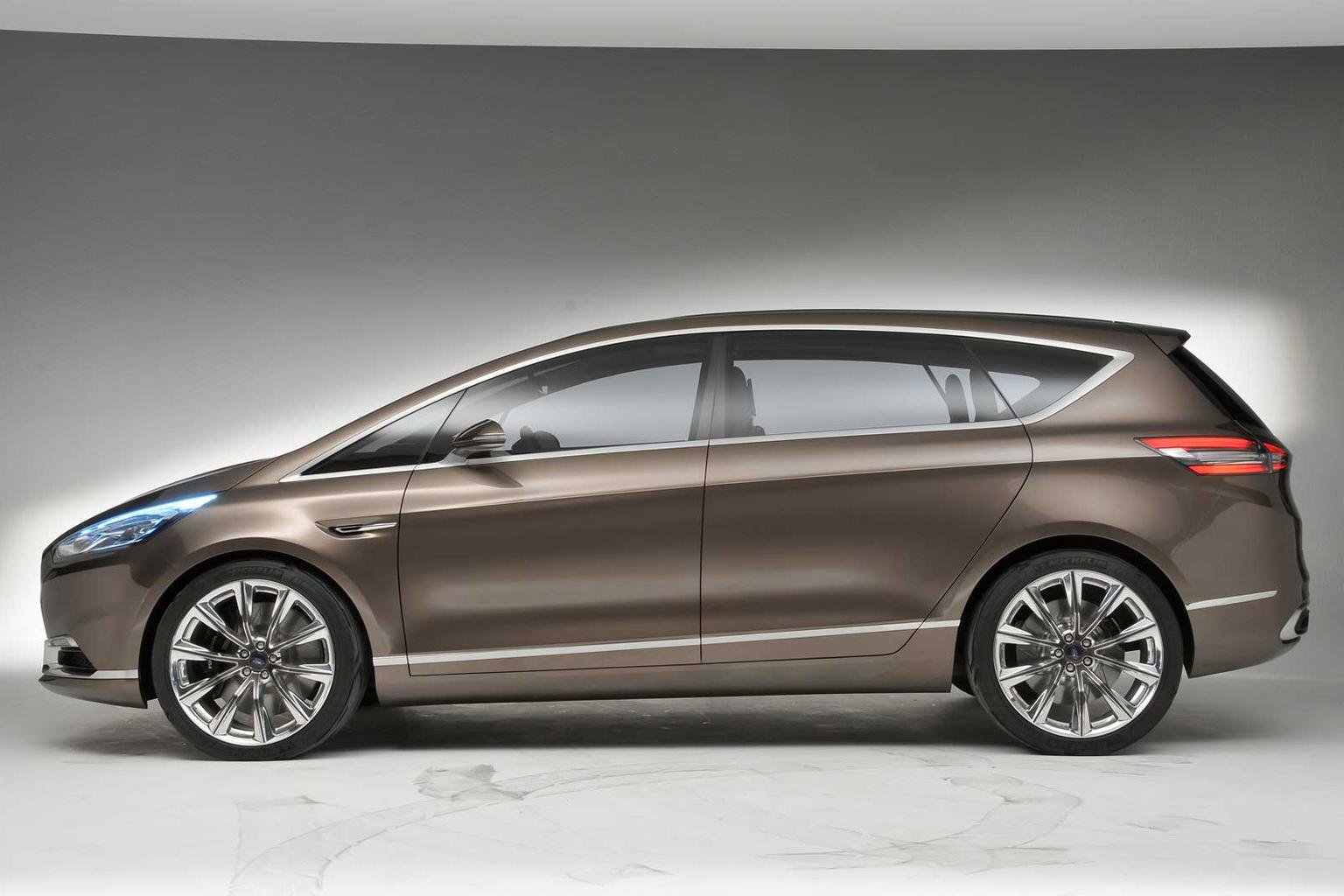 This is the new Ford S-Max, previewed as a concept that will be Ford's main attraction at the forthcoming Frankfurt motor show.

Originally unveiled back in 2006, the S-Max has been a huge hit for Ford, thanks to its mix of dramatic styling, a rewarding drive and everyday practicality. It has become a popular choice for those who want MPV features without looking like they need them – and Ford's designers claim they have focused on building on those values.

The show car has a number of concept-only touches, but its overall profile and shape will be kept for the production version. The new S-Max will sit on the same chassis underpinnings as the next generation of Mondeo – but since that set-up is, in turn, already a modified version of the current cars', the wheelbase remains the same.

The S-Max concept does look longer – but that's because the roofline is around 25mm lower than the current car's. It'll rise by around 5mm for production, though – so the next-gen S-Max will still be low for a people-carrier; Ford says this is a direct result of customer feedback.

Should a new S-Max come up behind you on the motorway, you could be forgiven for thinking that it's a saloon instead of an MPV; the combination of that lower roofline and a wider stance – accentuated by more dramatic head- and foglights – makes it look more aggressive than any other seven-seater.

The concept has a windscreen that runs farther back than normal, then narrows into a strip of glass that runs down the centre of the roofline. It's thought that the longer windscreen is likely to make production, although it will probably be offered as an option.

At the rear, the S-Max's familiar strip of metal between the narrow tail-lights has been retained - although a sharp crease along the flanks has allowed Ford's designers to give the car a more muscular, 'shouldered' stance.

Inside, the show car's dashboard previews a new approach from Ford, with fewer buttons and a cleaner, more sophisticated design. A large piece of perspex sits proud of the fascia's large central screen; it will be fitted with touch sensitivity so you'll tap the glass, not the display beneath it.  Ford's chief designer Martin Smith says that the overlay is designed to "accentuate the flow through the cabin" by drawing the eye from the top of the dashboard down towards the transmission tunnel. It looks strange, though, sitting a couple of centimetres proud of the fascia.

The screen will be a 'dual-view' unit, allowing driver and passenger to watch different material simultaneously. Rear passengers will be able to plug in their own multimedia systems and view them on screens mounted at the back of the front headrests.

The show car has an electronic parking brake and, intriguingly, a rotary gear selector. Ford brand Lincoln has used this set-up in American-marked models, but it's not yet confirmed for the final S-Max.

Regardless of how the final design is resolved, the next S-Max will get the latest generation of Ford's Sync infotainment system. Ford claims the technology will be able to monitor the driver's heart rate and glucose levels, and use connectivity to alert medical services or even tell the car to bring itself to a halt in an emergency.

The second row of seats has room for three passengers, but the middle seat back folds forwards to allow step-over access to the third row. Its back also has plastic mouldings so it can act as a side table with built-in cup-holders.

The third row of seats folds flat into the boot floor. Ford hasn't released any images of them in place and the seats weren't functioning on our studio car – but sources say the sixth and seventh seat space is "comparable to the current model's". As with the current S-Max, the boot looks a fair size with the car in a five-seat configuration - and the load lip is still impressively low.

The final production version of the S-Max should be shown next autumn, with sales due to start in early 2015. Ford hasn't confirmed specs or prices, but it has acknowledged that its new 1.5-litre Ecoboost turbocharged petrol engine will be included in the line-up. Diesel options are likely to be 1.6- and 2.0-litre units, in various states of tune, and we'd expect the standard transmission to be a six-speed manual, with a six-speed dual-clutch automatic available as an option.