We've driven prototype versions of the new and eagerly anticipated BMW 5 Series saloon here in the UK. It's got some serious potential...

The UK market is now so important to BMW that it carries out testing on our roads. To get a sneak preview of what the 2017 BMW 5 Series will be like to drive we went to North Wales to drive some late prototypes.

The 530i petrol has plenty of low-end shove, giving really accessible performance without you having to drive the wheels off it everywhere.

However, if you have pockets deep enough to pay the fuel bills and yearn for more speed, the 540i could be the one. The prototype we drove needed some work to smooth out its throttle response; it was a touch jerky as you poured on the power. However, once the engine’s shove hits, woof, you’re off, and the motor revs cleanly all the way to the redline, accompanied by a pleasing growl from its silky six-cylinder engine. 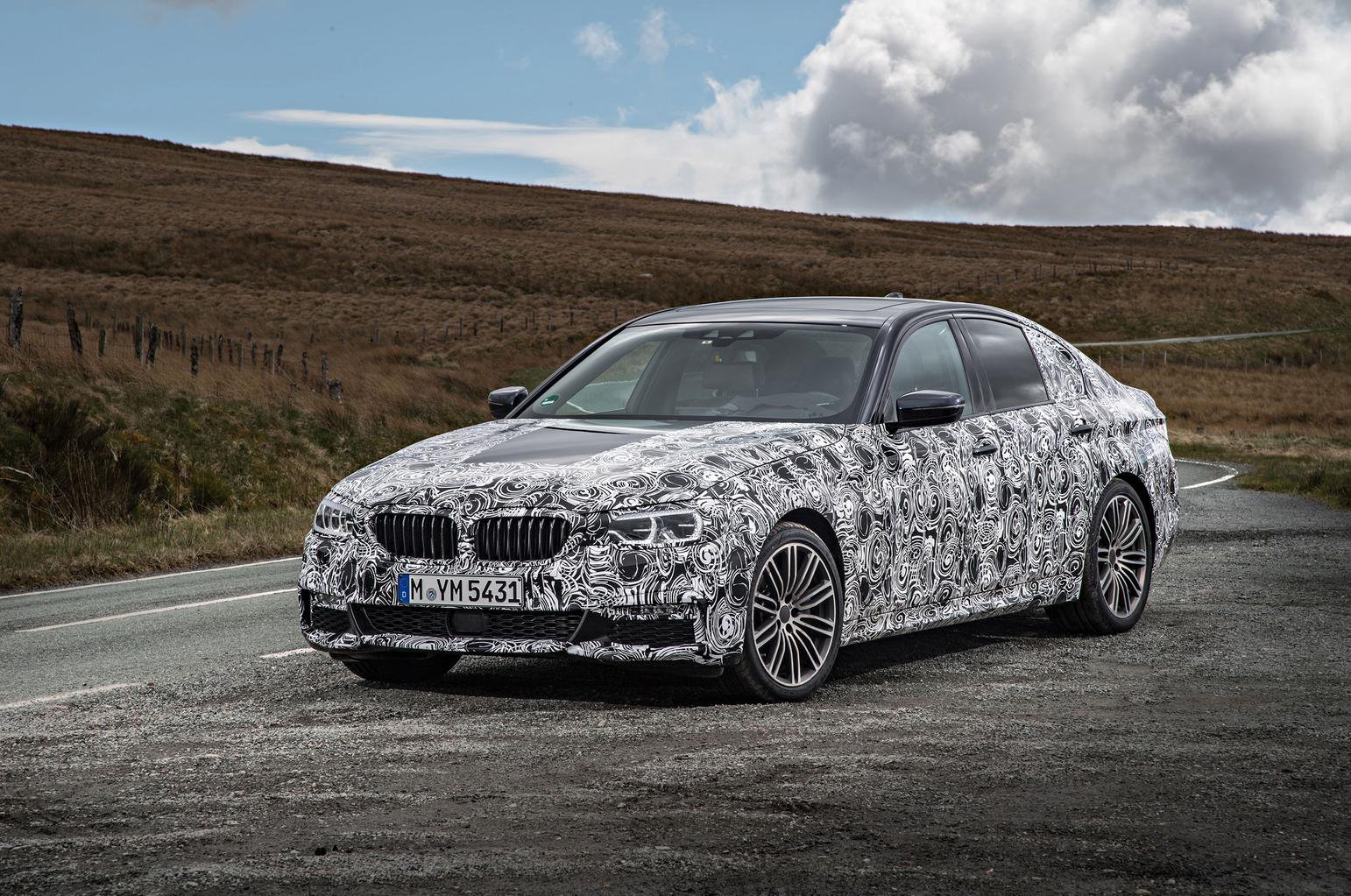 It's worth noting that the 530d sounds almost as good – albeit with a bit of background diesel thrum – and still offers blistering pace. Combined with the prospect of sensible CO2 emissions and fuel consumption, of the three engines we tried, this would be our choice. That said, the 520d will likely end up being the one we'd most recommend.

All the cars we drove had an eight-speed automatic gearbox. This will be standard on the larger engines only, while less powerful models will get it as an option. Its one we'd tick, because the auto is a delight, kicking down keenly when you need sudden acceleration, then slurring slickly through its gears when you fancy a cruise.

The standard suspension offers a reasonable blend of ride and handling; there’s some body lean during hard cornering and a slightly firm low-speed ride, but otherwise it mixes balanced cornering with a comfortable progress. Sports suspension feels firmer, but you get less lurch in the corners and better body control over dips and crests, making the car it's fitted to feel even more planted.

The adaptive dampers, meanwhile, really do give you the best of both worlds, allowing you to select a softer ride to even out those scraggy roads, with a firmer setting to keep things tied down when you want to have some fun.

Regardless of suspension set-up, this new lighter-weight 5 Series feels more agile and quicker to change direction than the outgoing model. This is amplified if you add that optional Integrated Active Steering system, which you can feel actively tightening your line as you turn in to bends.

As with the suspension and engine settings on these prototypes, the steering set-up hasn't been finalised. We did notice some variation in feel between the models we tried, but BMW assured us this would be dialled out on the production versions. Yet the general theme is that the steering feels light around town, but provides more feedback around the straight-ahead and better weight build-up in turns than on the current car, giving you more confidence behind the wheel. 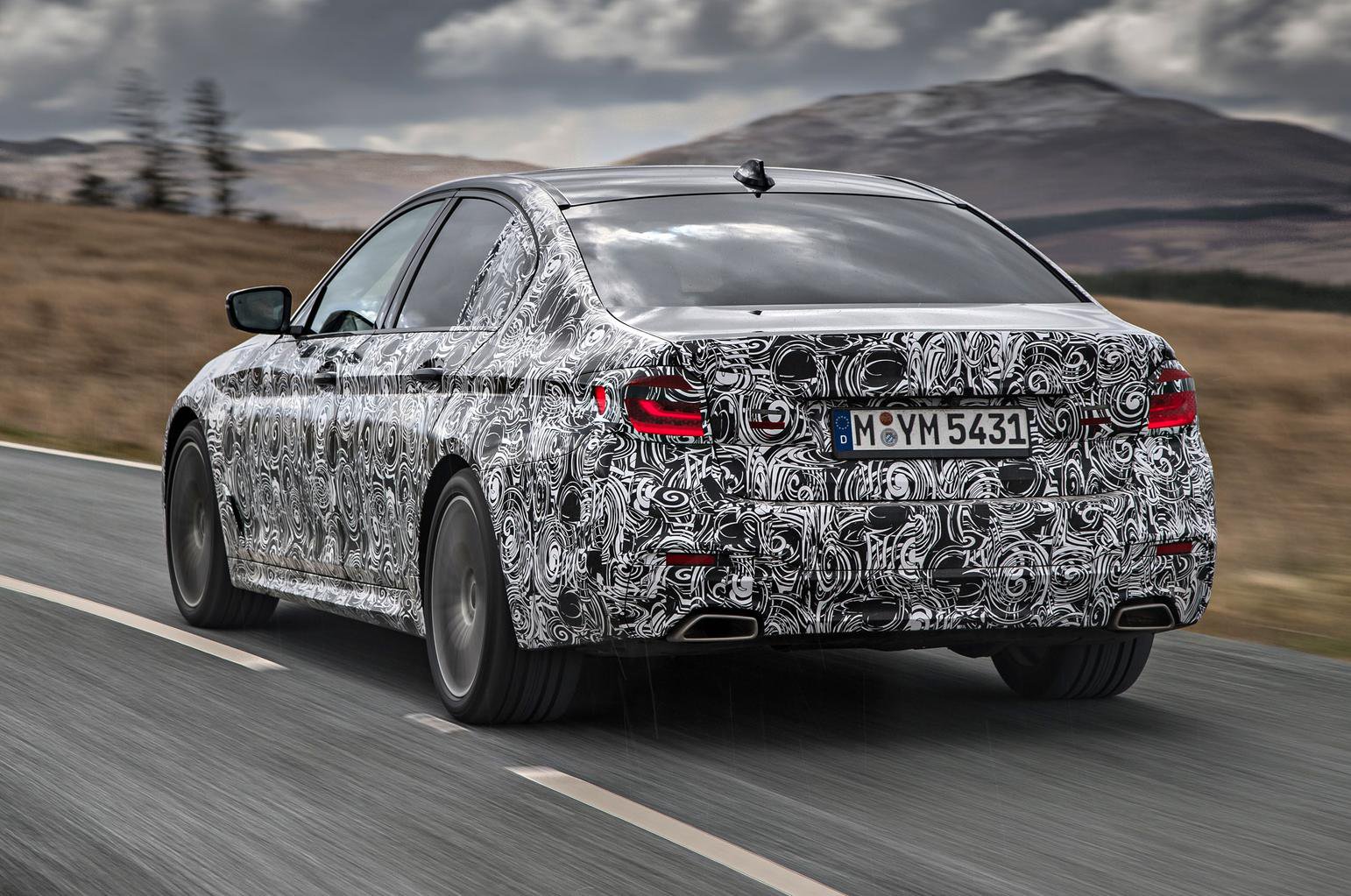 In addition, the driving position is first-rate. There's a great view of the road ahead, and with well-aligned driver's seat, pedals and steering wheel, it's relaxing even after a couple of hours behind the wheel. That said, these were left-hand-drive models, and traditionally right-hand-drive BMWs end up with their pedals offset to the right.

Read our full review of the outgoing BMW 5 Series