A day (and a night) at the races 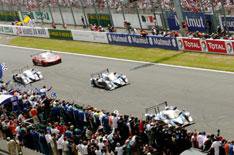 Blog; June 16, 2009
Our Jaguar XF has been attracting admiring glances in unlikely surroundings at Le Mans, no less. Given the amount of exotic machinery to be found there when the 24-hour race is on, this is some compliment to Ian Callum and his design team.

Le Mans is the one fixture on the annual sporting calendar I regard as a must. Even if I was on my deathbed, I'd find a way of getting there. My only non-appearance in the last 14 was in 2000 (I forget why), yet I'm a mere novice. On Sunday I got chatting to someone who's been ever-present since 1979.

If you've ever been, you'll understand perfectly. If you haven't, let me try to explain what makes it special. Primarily, there's the fact that it takes place over a day and a night, giving you time to see the cars from different vantage points and in different light and conditions. It's also important, I think, that it takes place on both purpose-built track and closed public roads.

It's the intangible things that do it for me, though. Saturday lunchtime, and the feeling of expectation as the 3pm start approaches. Dusk, when headlamps set the armco barriers aglow long before a car hoves into view. Night, and the sound of racing engines reverberating through the trees. Sunday morning, when you check the leader board then realise there's still a third of the race to go.

Then there's the speed differential between 230mph prototypes and the 180mph sports cars they regularly have to pass. The driver in the faster car can't back off and lose time. He just has to hope the other guy is using his mirrors

I've stayed on campsites and in hotels and rented chateaux over the years; driven, flown and even gone by train a couple of times. I've rarely enjoyed the journey down as much as I did in the XF, though.

Jaguar XF a willing companion
I've said it before, but it bears repeating: this car was made for journeys such as this. There aren't many cars this side of £50,000 that ride so well when you simply want to gobble up distance, but provide such satisfaction if you decide to take the scenic route.

It's 312 (mostly motorway) miles from the Eurotunnel port at Calais to the media accreditation centre in Le Mans. The Jag did it in four hours flat at an average 36.5mpg. Passes collected, the last 25 miles of my journey to where I was staying were completed on French rural roads, allowing the XF to show that, even with a V6 diesel engine and an automatic gearbox, it's a sports saloon when it wants to be.

On Monday morning, after a night helping Peugeot celebrate a one-two victory over Audi, I set off home on roads where, 24 hours earlier, racing cars had been travelling at nearly four miles a minute. I won't have the Jag when next year's race comes around, more's the pity, but I will be there.