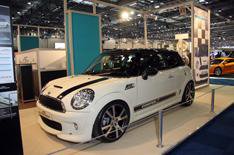 AC Schnitzer has built up a formidable reputation for tuning anything that comes its way, and on show in London are some fine examples of its latest work.

All this comes at a price, of course: 30,096.86, to be precise. Quite why they insist on being that specific, were not sure.

Its makers say the kit improves engine performance by 24-73bhp and steering, while features include more aggressive styling, a rear spoiler and carbonfibre detailing on the inside.