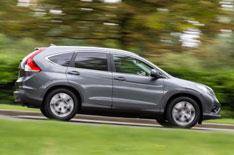 The all-new Honda CR-V will cost from 21,395 when it goes on sale in October.

Honda will offer a 2.0-litre petrol or 2.2-litre diesel, and four trims. The range will also include two 2WD models for the first time in Europe.

The entry-level model will be the two-wheel-drive version of the 2.0 i-VTEC S. S trim includes dual-zone climate control, cruise control, 17-inch alloys and a CD player.

Four-wheel-drive versions start at 22,495 for the 2.0 i-VTEC S 4WD. Diesels have a 2110 premium over the equivalent petrol model, while an automatic gearbox available only on the 4WD models is a 1500 option on petrol cars, and 1640 on diesels.

Both petrol and diesel models are more efficient than the cars they replace, with manual diesel versions of the S and SE having sub-150g/km CO2 emissions for the first time. That puts them in VED band F, compared with the outgoing models Band H rating. Similar gains have been made with the petrol models, which drop two VED bands in S and SE form.