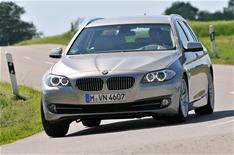 The recently launched 5 Series gets some attention in Paris, with the addition of some new diesel and petrol engines.

BMW has also unveiled all-wheel-drive xDrive versions of the 5 Series, but there are no plans to bring them to the UK.