More for you |
Every 5-star car on What Car?Used test: Maserati Levante vs Porsche MacanNew issue of What Car? magazine on sale nowMost and least reliable small SUVsRevealed: the car makers whose discounts have got bigger since lockdown
Home
News
Inside the DS Inside
news

Inside the DS Inside 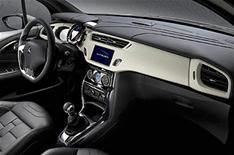 These are the first pictures inside the Citroen DS Insides radical cabin.

The concept car was first shown at the Geneva motor show earlier this year, but with blacked out windows and no cabin. Now weve been able to see inside the car which points the way to a new generation of sporty and upmarket DS models.

The styling manager of the DS Inside, Mark Lloyd, says the concept has not an ounce of retro in it. As the pictures show, the small steering wheel, short gearlever and sculpted dash give a driver-focused feel to the cabin. The dash is covered in leather with an unusual quilt-like finish, which matches the roof. The seat design mimics the straps of a wrist watch, while black chrome highlights give a clean, cool look.

It might be out of the ordinary, but Lloyd says the concept is 90% the real car, referring to the DS3 production model. Were exploring possibilities. The dash structure will be the same, but the instruments, seats and door panels will be different.

The DS3 will be the first of a new generation of Citroens to bear the famous DS name when it goes on sale in March next year. Models based on the C4 and C5 will follow to create an upmarket, sporty brand to sit above regular Citroen models. Some will put more emphasis on sporty looks, handling and performance, while others will be more luxurious.

All future DS models are likely to share the sharks fin door pillar of the DS Inside. They will also feature the new DS badge, which Lloyd says uses the chevrons from Citroens logo but turned around to spell out DS.