* Farewell to our Jaguar XF * Was it a winner or loser? * Read our final report here... 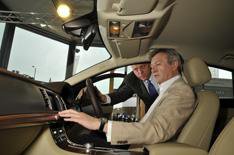 Sound investment
Frankly, if you buy an XF without the B&W sound system, you deny yourself one of the major pleasures to be had from the car. B&W is the Jaguar of the hi-fi world: a relatively low-volume, high-quality maker of performance speakers that deliver rich, pure sound.

I remember a senior engineer with one car company telling me that people no longer talk about the distances they cover, but the amount of time they spend in their cars. I kept recalling that when stuck in traffic, calmly listening to music while others fumed.

Everything about the XF's cabin is so comforting and relaxing, and it seems the few things we weren't struck on led by the absence of turn-by-turn sat-nav instructions in the instrument panel were corrected at the same time as the engine change. Rear-seat passengers loved the roomy rear compartment (if not the thin cushioning of the seats themselves), and the boot was big, too. It could be made bigger if you tugged two handles in the boot to lower the rear seats although I seldom needed to.

Dislikes?
The handbrake button still gets fiercely hot after an hour or so, a few minor switches are badly juxtaposed and the quality of the rear armrest isn't in keeping with that of the rest of the car.

I'd agree with some of the reader reviews on whatcar.com that the XF isn't cheap to run. Average fuel economy of 30.3mpg is probably due in part to how much I enjoyed driving the car.

Where my experience differs with that of some readers is in reliability. One morning, I was mystified to find the battery had gone flat. Thankfully, a mobile technician sorted that out quickly. However, I've had none of the electrical glitches that have regularly sidelined a few owners. A bit of loose rubber door sealing is the worst I have to report.

The XF has more than justified our decision to make it Car of the Year in 2008. The best measure of any car is whether you'd make the same buying decision again. My answer, unhesitatingly, is yes'. I felt something bordering on grief the day my car went.
Roger.Stansfield@whatcar.com

What Car? says
Nice to know we can beat the Germans at something
****