More for you |
LISTEN: Car of the Year PodcastNew issue of What Car? magazine on sale nowPromoted | 5 reasons why it makes sense to go electric todayBig savings on our Car of the Year Awards winnersWhat Car? Awards 2021: The best cars you can buy
Home
News
Jaguar C-X75
news 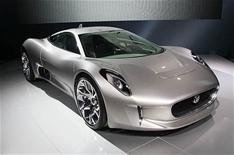 The C-X75 is a four-wheel-drive range-extender electric two-seater with two micro-turbines that act as generators for the car's electric motor when the battery charge has been exhausted. The micro-turbines, which can be fuelled by any fossil fuel, never drive the car, unlike the turbines in an aircraft jet engine.

Four 145-kilowatt (195bhp) electric motors mounted inboard of each wheel drive the car. Jaguar quotes a range of 68 miles on a full charge, but the micro-turbines extend this to more than 550 miles. Even in range-extender mode, CO2 emissions are just 28g/km less than a third of the best fossil-fuelled city car (the Smart Fortwo diesel) currently on sale in the UK.

The twin turbines can automatically charge the car's batteries on the move or, in track mode, take it to a maximum speed of 205mph. Jaguar quotes a 0-62mph time of 3.4 seconds a match for the best V12 supercar on sale today.

The British company Bladon Jets supplies the gas turbines under an agreement with the Government-sponsored Technology Strategy Board, which brings businesses together to drive innovation. Turbines are said to offer a number of advantages over conventional piston engines: they do not need oil lubrication or water cooling (which saves weight), and can run on a range of fuels.

The story continues along with a photo gallery below this video...

Callum admits it's a show car at this stage. 'We've thrown a rock into a pond and we'll watch to see how big the ripples are,' he said. 'Let's wait and see. But it is a hint at future sports cars.'

Julian Thomson, Jaguar's advanced design director and the man who headed the team which created C-X75, says previous Jaguar show cars were created with future production models in mind, but this one was designed to show what the company can do. 'We want to prove that, using the legislation we have to work to, we can do great-looking cars,' he said.

It's unlikely you'll ever be able to buy a car like the C-X75, even with a conventional petrol engine, but Callum says that is not the point of it. 'To quote Albert Einstein: "Imagination is much more important than knowledge",' he said.