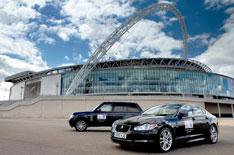 Jaguar Land Rover has been signed up as a 'official supporter' of Englands bid to hold the 2018 football World Cup tournament.

The agreement will see Jaguar and Land Rover provide vehicles to help boost the countrys bid to host the event.
The companies will supply four Range Rovers, one Discovery 4 and four Jaguar XJs to carry members of the games international governing body FIFA, when they arrive in Britain later this month to carry out inspections.

At England 2018, we are committed to proving we have the qualities required to stage the worlds biggest tournament and to have the support of brands that are so recognisable across the entire globe is tremendous news.

Englands World Cup bid includes stadiums in Plymouth and Milton Keynes, alongside more the more traditional hotbeds of football heritage such as Liverpool, London and Manchester. The winning bid will be announced in December.

Beckhams make 2018 bid a family affair
The news that Jaguar Land Rover has joined the England bid as an 'official supporter' really does make it a family affair for the Beckham dynasty. David is one of England 2018 bids vice-presidents, while Victoria is busy working for Land Rover as a creative design executive.