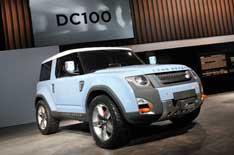 Land Rover has unveiled a more rugged version of the DC100 Concept car at the LA Auto show.

The car was originally revealed at the Frankfurt motor show in September. .

The car is designed to show what a future Defender could look like.

Despite the funky styling, the company's design boss, Gerry McGovern, has told What Car? that the new Land Rover Defender will not lose any of its capabilities or off-road credentials when it goes on sale in 2017.

'It will be as hard as nails and a working tool,' he said. 'The new Defender will be affordable and stripped right down'.

Also on show is the DC100 Concept Sport an open-top version of the concept car. We've already driven the car, and you can see the report here: Land Rover DC100 Sport driven.