* Points to Defender replacement * Concept car to showcase design * New Defender due in 2015... 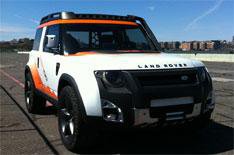 The new Defender isn't due until 2015, but Land Rover gave us a glimpse of its design direction with the hard-top DC100 and open-top DC100 Sport concept cars at the Frankfurt motor show in 2011.

We tested the open-topped DC100 Sport concept car earlier this year, but this is our first drive in the hard-topped DC100 Expedition version on show at the 2012 New York motor show.

Whats the Land Rover DC100 Expedition like to drive?

Land Rover stressed that the DC100 Expedition concept car is strictly a design model, rather than a vehicle that offers any true indication of a production car's driving ability.

The concept car is powered by a V8 petrol engine that sounds meaty and appeared to be responsive on the low-speed on-road circuits we completed.

The seating position seems slightly higher than the likes of the Range Rover Evoque and the Land Rover Freelander. This gives a great view out of a light and airy cabin. However, there's none of the safety kit that would surely beef up the windscreen pillars and restrict visibility on any production car.

The sense of airiness is boosted by a large glass roof, which extends back over the rear boot space. The rear space contains two side benches in the same vein as the current Defender, although the loadbay is considerably smaller.

None of the switches and levers in the concept's cabin are functional, but the dashboard looks simplistic and smart. A dash-mounted gearlever is a neat touch, and a pleasing throwback to past Land Rovers. Overall, there is a simplistic yet functional atmosphere in the DC100 that is more familiar to the Defender than its more upmarket Freelander and Discovery siblings.

The DC100 Expedition has appeared slightly garish in previous paintjobs, but this latest offering in white and orange is more conservative and should go some way to appease diehard Defender fans.

You cant. However, Land Rover has confirmed the new Defender is set to appear in 2015. Let's hope a decent chunk of this cars styling makes it over to the production car.

The DC100 Expedition offers an exciting glimpse into the possible future of an off-roading icon.