More for you |
DVLA warns of 20% increase in car scamsWhat Car?'s top 10 used electric cars (and the one to avoid)10 most unreliable SUVsWhat Car?'s best cars for less than £250 per monthGuaranteed discounts on our 2020 Award winners - save up to £19,366
Home
News
Land Rover to make its first 2WD car
news

* First two-wheel-drive model * Alternative fuels high on agenda, too * Hybrid on sale in 2013... 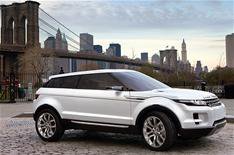 Land Rover will introduce its first two-wheel-drive model next year to cash in on the growing demand for crossovers.

The compact Range Rover, based on the LRX concept car of 2008, will be available with two- or four-wheel drive.

'The two-wheel-drive option will give customers the chance to benefit from lower entry-level pricing, plus CO2 and fuel economy efficiencies,' said managing director Phil Popham.

However, Popham promised that Land Rover 'remains committed to four-wheel-drive leadership' and said it would 'continue to make the best all-terrain vehicles for customers who require the ultimate in off-road driving'.

Alternative fuels
Land Rover has established a six-point action plan to phase in alternative-fuel vehicles and dramatically reduce the CO2 of its range over the next 30 years.

The programme began last year with the introduction of an engine stop-start system on manual diesel versions of the Freelander, which now account for half of the company's sales.

The next step is to introduce stop-start on cars with automatic gearboxes. Hybrids, plug-in hybrids, range-extender electric vehicles and hydrogen fuel cell cars are also on the agenda.

'These things are going to come and we'll be ready,' said Pete Ritchings, chief hybrid engineer.

'The timescale will be driven by customer demand and the development of infrastructures to support them, but they won't come cheap.'

First hybrid in 2013
The company's first hybrid powertrain will appear on the next Range Rover in 2013. The motor is housed within the ZF eight-speed automatic transmission to help save weight, a system being co-developed with other manufacturers.

This new Range Rover will also mark the start of a new family of lightweight platforms being developed by the company.

Land Rover has scrapped the hybrid system it had been working on for the LRX, which involved a front-mounted diesel engine and a rear-mounted electric motor. Development has ceased on the grounds of cost and complexity.

However, Land Rover says it is working on a plug-in hybrid system that would give a car such as the Range Rover a 20-mile range on electric power alone, emissions of 100g/km and a top speed of 120mph (50mph on battery power). Five test mules, based on the current Range Rover Sport, will begin fleet trials later this year to help engineers decide on the final specification of the system.

Range extender vehicles
Land Rover believes range-extender electric vehicles in which an on-board combustion engine serves as an electricity generator to give the car a greater range than it would have on plug-in power alone have 'got a real future'. Ritchings says the company already has 'a very active project going' and that there are internal demonstrator vehicles already running around.

On the future of stop-start with auto-gearbox cars, he says the main issue is to ensure that driveability does not suffer. Land Rover is working on what it calls a 'change of mind strategy' for the software that controls the system so that the car will always be ready to pull away, even in crawling stop-go traffic.