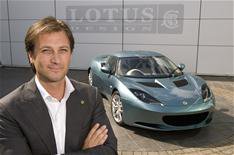 Lotus believes the city car it plans to launch in 2015 will have more credibility than the rival Aston Martin Cygnet.

The Lotus city car will be a joint venture between Lotus and its parent company Proton. The car was previewed at the Paris motor show in 2010.

Lotus CEO Dany Bahar believes the British sports car company will be able to ensure the new baby Lotus offers more than the Aston Martin Cygnet, which is a heavily rebranded Toyota iQ. 'The difference between our city car and the Cygnet is that we're involved in the development right from the start,' said Bahar.

'The rebadging exercise really isn't appropriate for a brand like Aston Martin; the Cygnet is just an iQ. We're looking to price our city car from 29,000, but it'll offer something different; it'll be a range-extender or an EV, for starters.'

Bahar also confirmed that the next generation of Esprit will be unveiled at the Geneva motor show in March 2013, with sales starting around four months later. The base model of the new supercar will be a hybrid, blending an electric motor (producing around 100bhp) with a Lotus-developed, normally aspirated V8 engine.

'The base car will be a hybrid,' said Bahar, 'but then the more extreme version will just have the V8, in a slightly more powerful form. The overall [power] figure will be less than the hybrid; the gains for the more extreme car will come through weight savings, not just in losing the batteries for the electric motor but also through carbonfibre body panels and so forth. Then there will be an even more hardcore model that's totally stripped out.'