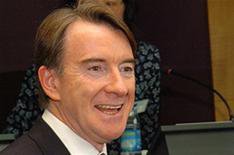 In a letter to European competition commissioner Neelie Kroes, Lord Mandelson said that Magna's restructuring plan was too expensive and could penalise highly productive factories such as those in the UK.

The letter, reported in the Financial Times, said: 'We do not believe the case has been demonstrated that the current Magna proposal is commercially the most viable plan.'

Lord Mandelson also urged the commission 'to ensure a commercially based outcome rather than one determined by political intervention and subsidies'.

Rival bids 'cheaper'
Canadian firm Magna International is seeking 4.5 billion (around 4.1 billion) of German-led government aid as part of the deal to buy Opel, but Lord Mandelson said rival bids would have been cheaper.

'Capacity at highly efficient plants in Britain and Spain is planned to be under-utilised, in favour of higher utilisation of some of GM's other less efficient factories,' Mandelson said.