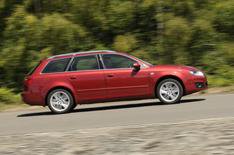 While the engine and suspension made the Exeo a fine motorway cruiser, it could never be described as an enjoyable car to drive. The steering is fine for a long-distance load-carrier, but if I did want to push on A-roads it invariably disappointed, being short of weight and sensitivity.

As a family of four with grandparents in Pembrokeshire, we regularly took the Exeo on fully loaded 500-mile round trips. Its a great way to test an estate in what should be its element, and while the Exeo was a decent car for the challenge, it was never quite as good as it should have been.

In particular, boot space is down on some of its key rivals. Sure, 442 litres with the rear seats up isnt small, and it was more than enough for popping to and from the shops, or the recycling centre, for instance. However, family in tow, Id soon fill all the available space to the roofline, even for a weekend away.

The story wasnt much better with the rear seats down; the 1354 litres of space I was left with was a practical, square shape, and the seats dropped down easily, but they didnt go flat. True, I had more than enough space when driving alone, but there were times when Id have preferred just a bit more.

Buying information
Running costs
Servicing and repair costs
Depreciation index
List- and Target PriceAnother issue was rear cabin space. Okay, at just over 6ft 2in tall Im well above average height, and therefore like to slide the drivers seat well back, but I was still shocked to discover it was a struggle to get a child in a Group 0 or 1 child seat behind me. Things improved when my son grew into a Group 2 seat, but I still had to sit farther forward than I liked. Not exactly ideal.

This problem was brought even more sharply into focus when I read the Exeos Euro NCAP safety rating report, and particularly the section that read: structures in the dashboard are considered to present a risk of injury to the knees and femurs. That was the same dashboard my knees were pushed up against, and Id urge anyone with a family considering buying an Exeo to take every member along on the test drive, just to be satisfied there really is enough space for everyone.

In fact, Seat is aware of this issue, which is why all new Exeos have resculpted front and rear seats for more rear-seat space.

The Exeo has had a busy year, covering 19,203 miles, but in the past three months some of the trim materials have started to creak in a way Id never associated with Audi build quality. Im also disappointed that its three-year resale value estimation has slipped over the 12 months Ive had it a Ford Mondeo Estate is now a marginally better performer. The passage of time isnt being kind to the Exeo it doesnt go beyond many of its rivals, to the extent that it faces an increasingly tough task to stand out from the crowd.

Overall, then, Id say I enjoyed running the Exeo without ever falling in love with it. It was a good motorway car that proved reliable and economical to own and run, and it was an honest workhorse. However, when I was travelling with passengers and their luggage, I couldnt help feeling that Id have been better served by an equivalent Mondeo or Skoda Superb Estate.

I travel a lot of miles, usually on journeys of several hundred miles, and the Exeo has been a great car to do this in. Its not the biggest, most comfortable or classiest car in the world, but you get a lot of car for the asking price which was, incidentally, very easy to haggle down.
Average whatcar.com reader rating