MG want you to name a road

* Name a road at the Longbridge factory * Just three days left * Lead up to launch of MG6... 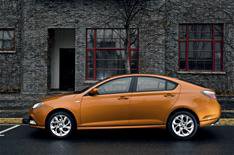 There are just three days left for you to have an access road to the Longbridge car factory in Birmingham named after you.

The competition is part of the build up to the MG6 family car, which will start to roll off the factory's production lines in October.

A small family car is also on the cards for Longbridge (or MG Motor Birmingham to correctly quote its new name) for 2012 and a supermini is planned for after that.

Ask the audience
If you want to suggest a name, get in touch with MG through its website by clicking here.

Theres no guarantee youll be picked, even if your suggestion is popular with lots of other people.

Alfa Romeo once asked readers of various magazines to vote for the name of its new supermini, and then ignored them when they chose Furiosa. They called the car Mito instead.