More for you |
Used Ford Fiesta long-term test reviewWhat can I do about a security issue on my car? Best cars for less than £250 per monthWhy is my new car’s fuel economy so poor?Top 10 used electric cars
Home
News
More Mercedes-Benz E-Class pictures
news 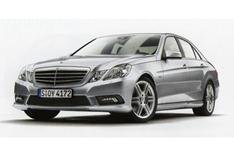 Exterior and interior pictures of the new Mercedes-Benz E-Class have been revealed.

The BMW 5 Series and Audi A6 rival is based on the Concept Fascination car that was unveiled at last year's Paris motor show.

The new Mercedes is said to be bigger than the current model, improving safety and rear passenger space. Boot capacity will also be up on the current saloon's 550 litres.

The engine line-up is also expected to be revamped with even more efficient direct-injection and twin-turbocharged units by 2011.

The saloon and Coupe versions are due to go on sale this summer, with an estate model due to arrive in October.