The 2014 Audi TT has been revealed at the Geneva motor show. The compact sports car features new technologies and cabin design that will appear on future Audis.

The new TT has almost exactly the same footprint as the outgoing model. It’s 418cm long, 183cm wide and 135cm tall. The wheelbase has increased by a few centimetres to 251cm. Audi has shaved off weight by using more aluminium in the car’s bodywork; the entry-level petrol car now weighs 1230kg – around 50kg less than its predecessor.

The fresh styling includes a large hexagonal grille, previously showcased on the Allroad Shooting Brake concept, which will become a familiar feature on Audis. There are also sleek, angular xenon headlights, which can be upgraded to standard LEDs, or the Matrix LED system seen on the new A8 luxury car.

The dividing struts in both the headlight and tail-light casings are the reflectors for the front and rear daytime running lights. The rest of the car is classic TT: sharp bonnet creases running from the windscreen pillars to the headlights, a sweeping waistline that runs the length of the car and a steeply raked roofline. The boot has a 305-litre capacity.

Most TT models will get two exhaust tailpipes within the rear diffuser, which are now closer than in the outgoing car. The car shown here is the TTS model, which gets dual twin tailpipes as standard.

The diesel and less powerful petrol models get front-wheel drive as standard, while the TTS is available with quattro four-wheel drive only. All the engines get a six-speed manual gearbox as standard, but Audi’s six-speed S tronic ‘box is an option.

The entry-level petrol will do 0-62mph in 6.0 seconds. If you opt for four-wheel drive and the automatic gearbox, it drops to 5.3 seconds. The quattro averages 41.5mpg and emits 159g/km of CO2.

The TTS model is now quicker than even a Porsche Cayman S. The 306bhp engine fires it from 0-62mph in just 4.7 seconds. The TTS also rides 1cm lower than other models and gets adaptive suspension as standard.

The 227bhp petrol and 181bhp diesel models get 17-inch alloys as standard, while 18s and 19s are available at extra cost. Quattro models can have 20-inch wheels.

The new TT will be the first car with the Audi’s ‘virtual cockpit’. The uncluttered design removes the central information screen in favour of a large 12.3-inch TFT monitor behind the steering wheel.

A large rotary bezel controller with an integrated touch-pad on top sits on the central console and controls the revised MMI infotainment system. The turbine-style air vents now have integrated temperature controls, while the blowers at each end of the dashboard can adjust the heated seats.

The TTS pictured above gets plenty of extra equipment over the standard models, including climate control, Audi’s Drive Select system, and sport seats with adjustable bolsters.

Audi will offer 11 exterior and three interior colours for the new TT. S line models have even more choice, including two-tone upholstery and contrasting colour stitching.

Delving into the options list will allow you to specify extras such as keyless entry and start, high-beam assist, heated front seats and a Bang and Olufsen 12-speaker sound system.

We expect Audi to release pricing information and open the order book by late spring, and the TT should arrive at dealers for test drives in the autumn. 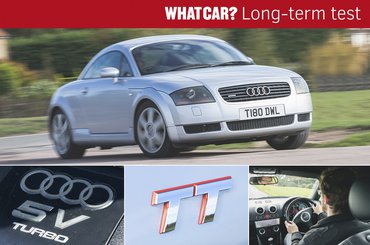 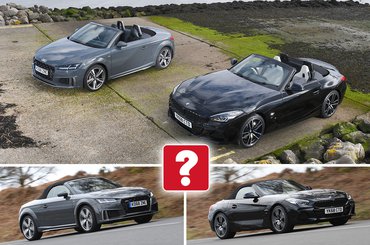