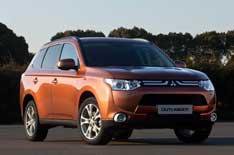 The new Mitsubishi Outlander has been revealed, ahead of its debut at the Geneva motor show 2012.

It is due to go on sale in the UK in late 2012. Its a direct replacement for the current Outlander and Mitsubishi says that the new model is similar in size.

Power will come from a 2.0-litre petrol or 2.2-litre diesel engine. Front- and four-wheel-drive versions will be available and a new six-speed automatic gearbox will be an option.

The Outlander is all but identical to the Mitsubishi Concept PX-MiEV concept car, which made its debut at the 2011 Tokyo motor show.

A plug-in-hybrid version will be launched in 2013. This model was previewed by the Mitsubishi Concept PX-MiEV, which combines a 2.0-litre petrol engine with two electric motors.

The platform that underpins the Outlander is expected to be used for the next Mitsubishi Lancer, and related Evo performance model. Citroen and Peugeot sell their own versions of the current Outlander, as the Citroen C-Crosser and Peugeot 4007, but a similar deal isnt likely for the new model.

The Mitsubishi Mirage is also expected to be at the Geneva motor show. The production version was revealed at the 2011 Tokyo motor show and the budget-priced supermini is due on sale in the UK later this year.