* Volvo XC60 rival to appear at LA show * On sale in the UK late in 2011 * Diesel engines and manual gearboxes likely for UK... 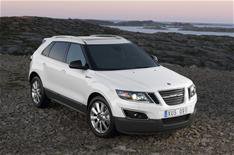 This is the all-new Saab 9-4X 4x4, which makes its debut at the LA motor show in November and goes on sale in the UK late next year.

The 9-4X is similar in size to the BMW X3 and Volvo XC60, and is based on the Cadillac SRX.

The car at the LA motor show is powered by a 296bhp 2.8-litre V6, and has four-wheel drive and a six-speed automatic gearbox. It can accelerate from 0-62mph in 8.3 seconds and has a top speed of 143mph. Fuel consumption or emissions figures aren't available as yet.

The four-wheel-drive system automatically distributes torque between the front and rear axles and there's also an electronic limited-slip differential at the back to further enhance grip.

Aviation-inspired styling
The car draws on 'subtle references' from Saab's aviation history and wraps the centre console around the driver. There's also green illumination for the dials, joystick-style air-vent controls and a cockpit effect is created by blending the windscreen into hidden front pillars.

The 60/40 rear seats fold down in one action without having to move the seat squabs or head restraints. There's some underfloor storage in the boot, which can also have a movable dividing rail and remote hydraulic tailgate operation. There's a decent 485 litres of boot space with the rear seats in place, but no maximum figure has been released yet.