Promoted | Hands-on with the CUPRA Ateca

Find out what happened when we invited a group of readers to sample CUPRA’s pace-setting performance SUV on-track at Castle Combe... 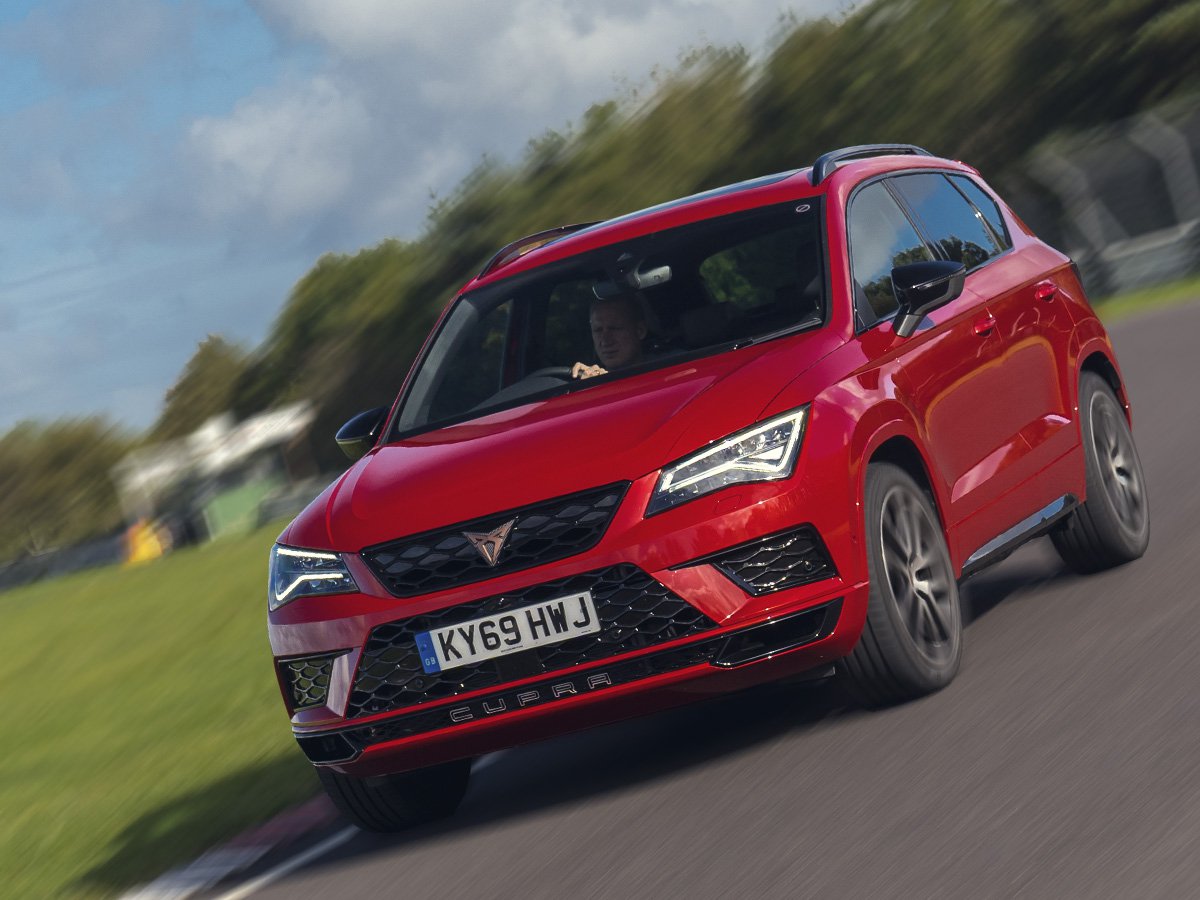 Ever since the CUPRA Ateca was revealed, there has been considerable buzz about this intriguing new brand and its first performance SUV. Our road test team have spent plenty of time behind the wheel, but what do our Autocar and What Car? readers think of this pace-setting model?

We invited a mix of hot-hatch owners with growing families, and SUV owners looking for something practical and fun, to Castle Combe. With former rally driver turned rallycross commentator Andrew Coley on hand to help them push the limits, they had the chance to learn what the CUPRA Ateca can really do.

To learn more about the new CUPRA Ateca, head to cupraofficial.co.uk

For many of our readers, this was their first chance to see the CUPRA Ateca in the flesh – its sporty CUPRA touches (the stylish honeycomb grille, the prominent quad-exhaust, 19-inch diamond-cut alloys and the copper CUPRA badge) helping to mark this SUV out in a crowded sea of rivals.

There was also a lot of praise for the high-tech, driver-focused interior, with its large high-res digital dashboard, 8-inch touchscreen and smartphone connectivity letting you customise your view between 3D navigation or performance-focused dials.

Cosseting Alcantara sports seats, copper-stitching and carbon fibre-effect surfacing add a touch of modern premium quality, while a huge panoramic glass roof adds to the spacious feel. The CUPRA Ateca also boasts the practicality of an SUV – with plenty of rear legroom and a 485-litre luggage bay with an electric tailgate.

Steve Hyams (BMW X1): “My BMW X1 is a nice car, but it lacks oomph. I’m hoping the CUPRA Ateca will tick that last box. In terms of design, there’s not a lot you can do with an SUV, but the CUPRA detailing gives it an extra edge. It’s like a stealth fighter – it’s not shouting about itself.”

Terry Irvine (Volkswagen Passat): “It sits lower than I expected for an SUV, but it keeps those nice smooth lines. With the big copper wheels and CUPRA styling, it looks different to standard SUVs, but it’s not overly flashy.”

Jamie Hoyles (SEAT Leon Cupra): “The twin exhaust looks mean – like a bigger hot hatch. The infotainment system is great, and I love the digital cockpit.”

Dan Garnon (BMW 330e): “It’s a familiar silhouette, but the copper wheels make it stand out in a ubiquitous world of SUVs. Inside, there’s lots of boot space, and it’s easy to reach the roof if you want to put a box on top. But it’s got the performance to scale it up when you want to have some fun.”

Dave Andrews (SEAT Leon Cupra): “In terms of looks, they’ve done a good job. It looks less like an SUV, and more like a performance car. Inside, I’m a big fan of the materials they’ve used, and the large sunroof really adds to the ambience.”

Patrick Stuart (Fiesta ST): “It’s got an aggressive look, but not too aggressive. Inside, it’s very comfortable, well laid out and well-specced. Everything feels nice.”

Chelsea O’Driscoll & Connor Pinches-Burrow (SEAT Ateca): “The CUPRA Ateca looks very classy – really modern. Our SEAT Ateca is great for our 10-month-old and our dog in terms of practicality and spec. It’s just missing that little bit of excitement.”

CUPRA spirit, where it matters

It’s behind the wheel where the CUPRA difference stands out. It starts with a 2.0-litre TSI turbo, delivering 300PS and 400Nm through a seven-speed DSG that has been engineered to deliver faster, smoother and sportier shifts. The result is a hot-hatch-like 0-62mph in 5.2 seconds and impressive mid-range acceleration.

Large CUPRA Brembo brakes deliver confident stopping power, while independent front suspension with MacPherson struts and a multi-link rear works with advanced 4Drive (all-wheel-drive) and adaptive Dynamic Chassis Control to improve stability and grip in the corners. Six driving modes include snow and off-road modes, as well as a special CUPRA mode which sharpens every element of the CUPRA Ateca’s performance and adds a sonorous note to the exhaust.

Steve Hyams (BMW X1): “I’ve driven performance cars and four-wheel-drive cars, but nothing that melds both as well as this. You wouldn’t know you were in an SUV. It doesn’t feel high up, it doesn’t wallow in corners. It feels well-planted and drives like a sportscar. Plus, it’s amazing how comfortably it rides for the performance it achieves. It hits the mark very well.”

Chelsea O’Driscoll (SEAT Ateca): “It’s really responsive when you put your foot down, and you can definitely tell the difference between Sport and CUPRA modes. Even though we were driving fast, it handles well and felt incredibly comfortable, safe and confident. I’m sure it will be like that on the road.”

Terry Irvine (Volkswagen Passat): “The braking was fantastic. It didn’t squirm, and it felt nice and planted. There wasn’t the roll I expected with a small SUV, and the balance seemed fantastic. It just seemed to grip and grip – far more than I could push it with my skills. That four-wheel-drive system seems phenomenal, and well-matched to the car. Day-to-day, I don’t think you’d have any worries.”

Patrick Stuart (Ford Fiesta ST): “It feels a lot smaller than you’d think. It hides its weight well, and corners better than you’d expect. The suspension was tuned well in Sport mode, and CUPRA mode would be perfect on a dry day. With the right driver, it could probably compete with smaller, lighter vehicles. It feels like a car that you can use every day, but when you want a bit of fun, it will do that as well.”

Connor Pinches-Burrow (SEAT Ateca): “The weather today was pretty horrific, but I felt really confident driving at that speed. You can tell it has better suspension, better brakes. It feels like it’s glued to the track, even when you’re giving it some.”

Dan Garnon (BMW 330e): “It’s very forgiving. Even if you catch it off-guard, it will carry you through a corner with confidence. You can dial the performance down for more comfort, and I was pleased with the ride. But, in CUPRA mode, it really comes alive.”

Dave Andrews (SEAT Leon Cupra): “I tend to drive estates. I’ve never driven an SUV before, so I was interested to see what the CUPRA Ateca is like to drive with its extra height and weight. On a wet track, in an unfamiliar car, I really wasn’t expecting that level of performance. The brakes are good, the ride is good. It felt very planted to the track and I’d expect it to feel that good on the road. It’s a compelling package.”

Dan Garnon (BMW 330e): “The seven-speed DSG gearbox is so quick and immediate. Plus, the ability to make the exhaust crackle and pop when you’re braking hard is fun. It’s the theatre of the car. It just puts a big smile on your face.”

With our readers out of the hot seat – and after a high-speed lap with Andrew Coley at the controls – they had a chance to ponder their first impressions, and sum up what makes the CUPRA Ateca stand out in the performance SUV space.

Steve Hyams (BMW X1): “The CUPRA Ateca exceeded my expectations, and it’s given me interest in a brand that I didn’t really know existed. For an SUV to be able to accelerate and corner like a sportscar – I thought that was the domain of Porsche. But now I realise someone else can do it almost as well. It’s frighteningly accomplished for a car you don't really notice – until it goes past you!”

Terry Irvine (Volkswagen Passat): “I don’t think there’s anything out there at this price point, with the same attitude, that is also usable every day. It’s a good balance of practicality and performance. An everyday supercar, with a big boot.”

Dan Garnon (BMW 330e): “This is a real CUPRA – a proper fast family car. It’s perfect for someone like me, who wants something practical that puts a smile on my face, while my daughter wants something stylish to be seen in. There aren’t many medium-sized performance SUVs that are well-price, well kitted out and look good, and it’s got the ability to scale up the performance when you want to have fun.

Patrick Stuart (Fiesta ST): “With something new and different, there’s usually compromise. But CUPRA have packaged this really well. It feels like the engineers have spent their time wisely. It gives you something special. I think they’ve nailed it.”

Dave Andrews (SEAT Leon Cupra): “It’s interesting that they’ve taken the Ateca – not an SUV you think would make a performance car base. But they’ve done a fantastic job of turning it into a car which has real performance and real pace. What they’ve done is really impressive. It’s well-engineered piece of kit.”

Jamie Hoyles (SEAT Leon Cupra): “I’ve previously owned a Ford Focus ST, a Renaultsport Megane and two Renaultsport Clios, but my Leon Cupra is the best hot-hatch I’ve had. We recently had a baby, so the CUPRA Ateca feels like a logical next step. A family-friendly car that looks quick and goes quick.”

Connor Pinches-Burrow (SEAT Ateca): “CUPRA have done the right thing, making it about the motorsport soul of the brand. It feels like a proper hot hatch, rather than lukewarm – the ideal family car for someone who isn’t ready to grow up.”

To learn more about the new CUPRA Ateca, head to cupraofficial.co.uk

Please be aware that certain features may only be available on certain trims or with specific additional options. Please ask your dealer for more details.