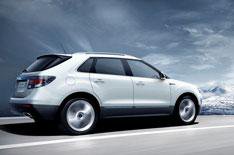 You get the sense that GM ownership clipped Saab's wings; as in independent company it's keen to stretch them again.

The new 9-4x ought to be a move in the right direction, but it's actually a hangover from the GM era; a model developed alongside the Cadillac SRX and built at the same Mexico factory.

Saab is at pains to point out that the project was headed by a Swede, however, and on the outside, there's no mistaking the 9-4x for anything other than a Saab. Those deep sides and bluff front make it look bulkier than it is; its overall dimensions sit roughly between those of an Audi Q5 and a BMW X5.

The engine range is pure GM. There's an entry-level 3.0 V6 model with front-wheel drive for the US, but Europe will only get the top-spec Aero model, which has a turbocharged 2.8-litre V6 and four-wheel drive.

With 296bhp, there's plenty of power on hand, but the standard six-speed auto 'box doesn't make the most of it; it's often too keen to down-change, or reluctant to change-up, so progress isn't as smooth or swift as it should be. The engine sounds hoarse when worked too, which is a shame when the 9-4x is otherwise quiet.

Saab's Drivesense system allows you to choose between 'Comfort, 'Sport', 'Intelligent' and 'Eco' modes, which tailor the way the steering suspension and throttle react accordingly. Swapping between them does little to alter the 9-4x's character.

Overall, it's a pleasant enough companion. It feels reassuringly planted on the road, turns in to corners with reasonable vigour and is generally undemanding. The ride seems mostly forgiving too, although the UK's roads will be a tougher test than the smooth US roads we drove on.

Inside, the 9-4x uses most of the same switchgear as the 9-5. Build quality even on the pre-production car we drove is good, but the materials aren't as classy as an Audi Q5's, which Saab sees as one of the 9-4x's key rivals. Plenty of space and a flat rear floor make the cabin family-friendly and the boot is large, if somewhat shallow.

Full details have yet to be confirmed, but UK models are expected to be very well equipped and cost around 40,000. That limits the 9-4'x appeal, but not as much as the absence of a frugal, tax-friendly diesel engine: Saab says there are no current plans to introduce one.

What Car? says: A decent effort, limited by high costs