More for you |
Every 5-star car on What Car?Used test: Maserati Levante vs Porsche MacanNew issue of What Car? magazine on sale nowMost and least reliable small SUVsRevealed: the car makers whose discounts have got bigger since lockdown
Home
News
Saab 9-4X on video
news 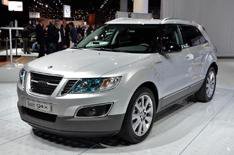 Saabs second new model since being bought by Spyker was rolled out at Los Angeles although it owes much to General Motors, its former parent company. The 9-4X, a luxury mid-sized crossover, is based on the Cadillac SRX and will be built alongside that car at a GM plant in Mexico. Watch the video to see if Steve thinks Saab has got back on track with 9-4X.