* Sold for 32 million * Coach-builder in Coventry is new owner * Spyker to concentrate on Saab... 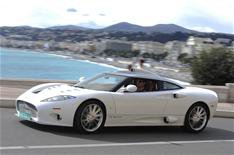 The parent company of Saab, Spyker Cars NV, is to sell its luxury sports car arm to UK coach-builder CPP for 32 million.

CPP has produced chassis and body panels for Spyker since 2000. Vehicle production of the C8 Aileron and all future Spyker models will be carried out at a new dedicated facility in Coventry.

says the sale of its sports car division means the company can concentrate fully on Saab, which it bought last year from General Motors.

'There was a split focus between Saab and Spyker cars, but now the management can really focus on the operation of Saab,' said a Spyker spokesman.

'It also reduces the company's debt and interest payments, so going forward the company is in a better financial position.'

Spyker Cars NV will change its name on May 19.