More for you |
Can I get a refund for my new car? Most and least reliable small carsBest used cars for learner driversBest used city cars The best new car deals for less than £125 per month
Home
News
Skoda unveils its Up - the Citigo
news

Skoda unveils its Up - the Citigo

* Skoda Citigo revealed * Skoda's version of the Volkswagen Up! * On sale next summer from around 7500... 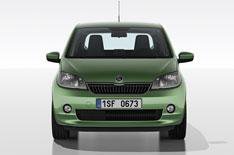 Skoda has a new baby, and if it looks a little familiar thats because it is. The Citigo is built on the same platform as another new car to make the headlines this autumn the Volkswagen Up.

Youd be forgiven for thinking at first glance that the little Citigo city car is almost a direct replica of its older brother. Their shared chassis gives them identical dimensions 3.56m long, 1.65m wide and 1.48m high and a strikingly similar stance.

Closer inspection reveals key differences. The Skoda has been treated to its own unique side panels with straighter lines. It lacks the Ups quirky curves, but its higher metal-to-glass ratio lends it a more practical air.

Practicality has informed every aspect of the Citigos design, according to chief designer Jozef Kaban: Were not into trying to look like Mickey Mouse; this isnt a toy, its a serious car.

There are pockets, holders and hooks for almost everything, including a curry hook, iPod holder and a dashboard photograph holder, which does feel like a bit of a clumsy lunge at the Citigos target market.

Given the cars size, its cabin is surprisingly spacious. The front-mounted engine and long wheelbase already seen on the Up are aided by minimalist styling, giving the illusion of even more space.

Skoda has put a lot of thought into making this a car suitable for kids and adult-sized passengers: sliding and folding front seats ease access to the back, while slimmed-down rear side pillars improve visibility.

Under the styling, however, the Citigos powertrain is unmistakably Up. Two three-cylinder 1.0-litre petrol engines, one 59bhp, the other 74bhp, emit 105g/km and 108/km of CO2. An optional engine start-stop system will bring CO2 output to below 100g/km, making the Citigo exempt from the Congestion Charge.

A diesel model has been ruled out on account of prohibitive costs, but a five-speed automatic transmission car will join manual gearbox versions towards the end of 2012. A sportier looking five-door version is also planned.

With its target audience of over-50s, young families and students, its not surprising that the Citigo will be cheaper than the Up. Dont expect to pay too much less though; pricing has yet to be confirmed but 7500 for an entry-level variant is our estimate, about 500 less than the VW.

Were not convinced the price will be low enough to distinguish this car from the Up or, indeed, their triplet, Seats new mini Mii, but Skoda at least is confident. It plans to sell 4000 in the first six months, and is hoping the Citigo will give it more traction with young women buyers.

A further sign of the Citigos importance to the Skoda line up: its the first car in the range to bear the new, refined Skoda emblem in black and chrome.