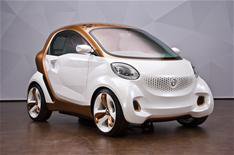 The Forvision shares its 55kw electric motor with the third-generation Smart Fortwo ED (Electric Drive), which will hit UK showrooms in the spring. It has a range of 87 miles, whereas the Forvision can do more than 100 miles.

Smart and technical partner BASF have focused on three key elements in the Forvision: lightweight design; insulation and reflection; and energy efficiency.

The doors, for example, with their 3D cuboid design, are made of carbon-fibre-reinforced epoxy resin, which is 50% lighter than steel and a third lighter than aluminium.

More revolutionary are the plastic wheels, which provide a weight saving of 3kg each over conventional metal wheels, adding up to a vehicle that is 12kg lighter when static and 18kg lighter when in motion.

The wheels are the first to be suitable for high-volume production. Testing is still under way, but according to BASF engineers, they could be fitted to real-world cars in as little as two years.

Another first is the energy-generating light-transmitting roof. Transparent solar cells, which are more practical and easier on the eye than traditional black panels, cover the surface of the roof and power the car's multimedia systems, as well as the fans that regulate cabin temperature.

The fans are a key part of the design. Smart has dispensed with air-conditioning, instead installing a propeller in the dash that sucks air into the cabin and channels it out through two smaller fans hidden in the tail lights.

Heating has also been rethought. Energy-intensive cabin blowers have been replaced with ultra-thin conductive material in the seats and door panels, which targets the lower back and arms the parts of the body that absorb heat best.

Other innovations include infrared reflective film applied to the windows and windscreen, as well as a coating developed by BASF, which contains a special pigment that reflects heat radiation and cools the surface of the car by up to 20C.

'There is one bottleneck for electric cars and that's range,' said Dr Annette Winkler, head of Smart. 'We wanted to focus on the whole car, not just the motor and battery to extend the range.'

She added: 'We have designed a vehicle that is so unique we can't wait to take it out of the research laboratory and onto the roads.'

With technology such as the solar cells still at the laboratory-testing stage, it may be a while before the Forvision makes it onto your driveway. Nonetheless, we expect to see some elements of the car influencing the design of next year's electric Smart Fortwo.