* New range of SUVs from the Korean brand * Compact crossover and mid-sized cars in 2015 * Rexton replacement due in 2016... 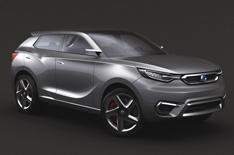 Ssangyong is set to launch a new model blitz that will signal a complete rejuvenation of the Korean brand's offering in the UK.

The first all-new model is a compact crossover to take on the Nissan Juke. Previewed as the XIV-1 concept car at the Frankfurt motor show in 2011, the baby SUV will spearhead the change in design and character for the brand. Steve Gray, marketing and communications director for Ssangyong UK, stated that the car was 'due to arrive in early 2015 and would be available as a three- or five-door, with a 1.6 turbodiesel and petrol engine'.

An all-new replacement for the mid-sized Korando SUV will follow, and has also been previewed as the SIV-1 concept. It will be bigger than the current model, but is likely to be offered with the same engine line-up in two- or four-wheel-drive configurations.

Finally, an even bigger SUV will arrive later in 2016 to replace the Rexton. The new car will be around 15% cheaper than the Hyundai Santa Fe and Kia Sorento, carrying on the current version's combination of a spacious cabin and off-road potential at a budget price.

In the more immediate future, a face-lifted version of the existing Korando is due before the end of the year. According to Ssangyong, as well as a new look, the update will address some criticisms of the current model with a higher-quality interior and improved refinement.

Before then, a new full-size seven-seat Turismo MPV has been launched to replace the Rodius. It will arrive in August and cost from around 18,000.

Gray also hopes 'to simplify the Ssangyong range to just two trims for each model,' and was keen to clarify that the company's products would remain budget offerings, despite the imminent changes for the brand.