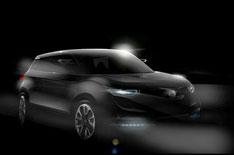 Ssangyong will unveil this XUV 1 concept car at the Frankfurt motor show next month.

The XUV 1 is a supermini-sized crossover, or Crossover Utility Vehicle as Ssangyong describes it. The company says the XUV 1 will have the high seating position of an SUV, but 'without any compromise in running costs', suggesting a two-wheel-drive set-up. No engine or drivetrain details have been revealed, however.

Ssangyong also promises the concept car will have an innovative interior, with all the major controls operated via mobile devices, and what it calls 'smart instruments'.

The car has a uniquely flexible seating layout, with 1+1+2 or 1+3 seat arrangements. It also has rear-hinged doors, like those on the Vauxhall Meriva.

It has a wraparound windscreen Ssangyong says the glass area is virtually uninterrupted to the rear pillars. This is complemented by a panoramic sunroof.

Ssangyong won't say if the XUV 1 previews any specific model, although a spokesman said the concept car isn't just a 'design exercise' and that styling cues on the XUV 1 will appear on Ssangyong's products.

See the lightened photos
Three silhouette photographs have been released of the XUV 1. We've lightened the images in photo-editing software, Photoshop, to get a clearer view of the car. Click into the gallery for a better look.