We’d have to forgive you if you’re not familiar with the Infiniti brand; even after doubling its sales with the Q30 model, it still sells fewer cars in a year than BMW sells in a single month.

To try and increase this figure further, the Japanese firm has produced the Infiniti Q60 Coupe. Based on the Q50 Saloon, it’s a competitor for the BMW 4 Series Coupe, Mercedes C-Class Coupe and the Lexus RC. That means two doors, four seats and a usable boot.

However, unlike the aforementioned trio, there’s no company car-friendly low emission version. Instead, there’s a choice of two turbocharged petrol engines that do without the hybrid assistance of some other Infinitis. The base 2.0-litre gets rear-wheel drive, while the V6 at the top of the range is four-wheel drive only. Whichever engine you go for, a seven-speed automatic gearbox is standard.

To find out if it’s worth putting the Q60 on your coupe wish list, read on to see how it drives, what it’ll cost and what it’s like inside. 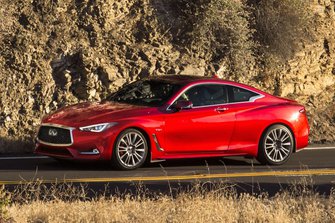