What should I look for in a used Mercedes CLK sports?

This version of the CLK is from the period when Mercedes first began to seek ways of cutting production costs. It's well made, but not as trouble-free as cars of old, and you should steer clear of any car with a scruffy interior unless you can get it cheap.

Worse still, spare parts are surprisingly expensive. For example, catalytic converter failure could set you back at least £900, while oil leaks from the cylinder head are a sign of a stretch-bolt problem.

About a third of cars that have caused a claim to Warranty Direct suffer axle and suspension problems, and electrical gremlins are also a problem, so make sure all the switches and controls work.

Other than that, on affected cars, check the logbook to see if the recall work to replace the rear seatbelt mechanism has been done. Also, check the fog lamps, which are prone to misting up, and be warned that the single arm wiper mechanism needs regular lubrication, which is not included in normal Mercedes service schedules. It's prone to failure and costs £800 to replace.

Last, but not least, as it's a convertible, make sure the hood is in good order and leak-free.

What are the most common problems with a used Mercedes CLK sports? 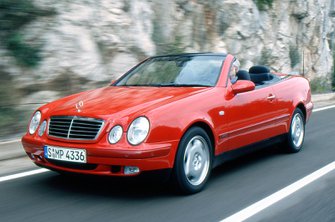