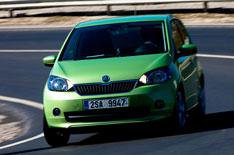 The Skoda Citigo is the company's version of the 2012 What Car? Car of the Year, the VW Up.

Just like the VW, the little Skoda is available with either three or five doors, but its the five-door version were testing here.

It goes on sale on June 1; the same time as the three-door Citigo weve already tested.

The Citigo shares almost all of its underpinnings with the VW Up, including the 1.0-litre three-cylinder engine (available with either 59bhp or 74bhp).

However, Skoda has had an influence on the cars styling both inside and out.

Whats it like to drive?
Remarkably good. Despite its tiny dimensions, the Citigo rides well over bumps and potholes, feeling as solid and as well damped as a much larger car.

Despite this, the Skoda feels most at home in a town environment. A tight turning circle helps with low-speed manoeuvres, while the light and precise steering makes it easy to negotiate tight parking spots. Theres enough weight to make the car feel stable on the motorway, though.

Out of town, the Citigo never feels fast; the small engines labour on steep inclines and maintaining momentum often requires changing down a gear. The engines are quiet unless you really thrash them, though, and that makes the Citigo a more competent cruiser than many other city cars, such as the Kia Picanto.

All versions are economical, but Greentec models add engine stop-start and low rolling resistance tyres to bring the car's CO2 output below 100g/km.

Another big selling point is safety: the Citigos optional City Safe Drive technology, which uses a laser to scan the road and automatically brake if it senses an obstacle an impending collision helps prevent low-speed accidents. Pricing for this will be announced at the Geneva motor show.

Whats it like inside?
There isnt a single piece of soft-touch finish anywhere on the dashboard or door linings, but that doesnt mean the Citigo feels cheap inside. Instead its smart and functional, with an uncluttered instrument panel.

Rear headroom is generous, although legroom isnt so impressive especially with tall people in the front.

Thankfully, this five-door version has the same generous 251-litre boot as the three-door model, despite the rejigging of the doors.

Standard-fit items include practical touches such as a hook for handbags (integrated into the glovebox handle) and net pockets on the inside edges of the front seats.

Should I buy one?
The Skodas big advantage over its Volkswagen equivalent is price. Given that the five-door Citigo is expected to cost 7950 (425 less than the entry-level VW) it makes a very compelling case.

Yes, the three-door version is even cheaper still, but given the tiny 350 premium this five-door model attracts, its our pick of the Citigo range.