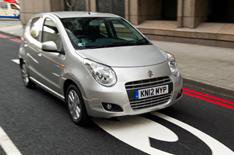 The 2012 Suzuki Alto has a range of updates, including a new, cleaner engine, and fresh interior and exterior colours.

The Altos 1.0-litre, three-cylinder petrol engine now has variable valve timing, which cuts CO2 emissions from 103g/km to 99g/km. This makes the Alto exempt from first-year road tax and the London Congestion Charge.

Crucially, a sub-100g/km CO2 figure puts the Alto in the same tax category as city-car rivals such as the Toyota Aygo and VW Up.

Average economy is boosted by 1.5mpg to 65.7mpg, while it develops 67bhp and 66lb ft of torque, as before. A five-speed manual gearbox is standard the optional four-speed automatic gearbox has CO2 emissions of 118g/km, down from 122g/km.

As well as the new engine, the 2012 Alto has new interior colours and fabric trim, and new wheel covers for SZ and SZ3 models. Glistening Grey metallic is a new paint option.