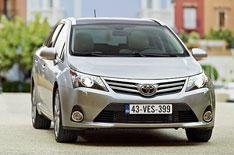 The Toyota Avensis is Toyota's rival to family cars such as the Ford Mondeo and VW Passat, and it has just been given a mid-life update.

However, the fact that Toyota decided the additional spot welds used in the construction of the face-lifted car were worth highlighting tells how minor the styling changes are.

Look hard and you can identify the 2012 Avensis from its predecessor by its slimmer headlights, more prominent front grille and redesigned rear lights and bumper. Yet if one were to pass you on the motorway, chances are the changes wouldnt register.

Toyota has made more significant revisions to the 2.0-litre diesel engine, boosting fuel economy from 53.3mpg to 62.8. At the same time, CO2 emissions fall from 139g/km to 119g/km, dropping the Avensis into the lowest, 13%, diesel company car tax band. Come April 2012, however, when the bands change, it will be taxed at 17%.

A new turbocharger its smaller than the one in the outgoing model and lots of minor internal engine modifications have made the 124bhp 2.0-litre diesel engine more responsive at low revs. However, it still doesn't exactly pull up trees.

Tall gearing further hampers progress, and unlike most modern diesel engines, which will happily rev well beyond 4000rpm, the Avensiss is effectively out of puff by the time it hits 3000.

Refinement is pretty impressive at tickover, with little mechanical clatter. Unfortunately, a boomy resonance can be heard and felt coming up through the floor once you're up to speed. At least wind and road noise are extremely well isolated.

Despite revisions to the steering and suspension to improve its dynamic prowess, the Avensis still feels well off the pace compared with rivals such as the Ford Mondeo.

The Avensis remains at its best when ploughing a straight furrow on the motorway, where the suspension quietly goes about its business. Throw in a few bends, though, and a woeful shortage of steering precision and plenty of body roll quickly curtail any notion of enthusiastic driving.

Whats it like inside? The cabin might not be the last word in style, but theres no doubting the quality of the materials or the precise standards of construction.

As a bonus, every model gets a new centre console that incorporates Toyota's latest touch-screen multimedia interface, called 'Touch & Go'. This is pretty simple to use and gives access to the audio and Bluetooth systems, as well as sat-nav with a Google local search function.

Should I buy one? Perhaps the strangest thing about the Toyota Avensis is that youd happily recommend it to your next-door neighbour, but probably wouldn't choose one yourself.

Solid, dependable, easy on the pocket and inoffensive on the eye, it is very unlikely to ever break down and its solidly built interior will resist anything you can throw at it.

In short, owning an Avensis will be a totally painless buying and owning experience, and it will gobble up the miles in effortless fashion. Just dont expect to enjoy the journey too much.