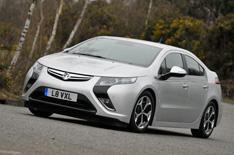 Weve driven the Vauxhall Ampera before, but this is the first time weve tried a right-hand-drive version.

So what is the Ampera? Basically, it's an electric car (or EV) with a back-up plan for when its batteries run flat.

As with most electric cars, you can charge the Ampera's battery pack by plugging it into a domestic socket, through which a full charge takes around six hours. Then, depending on your driving style (and a few other factors), you'll be able to travel around 35 miles on pure electric power.

Where the Ampera differs from other EVs, is that its electric motor is backed up by a 1.4-litre range-extending petrol generator. This continues to provide the motor with a source of electricity when the batteries run out of charge, which means you won't be left high and dry should you need to tackle a long journey. In fact, you can keep going for as long as theres petrol in the tank.

Whats the 2012 Vauxhall Ampera like to drive?
The first thing that strikes you is how quiet the Ampera is. You barely hear a peep from the motor in full electric mode, and? things remain hushed even when the petrol generator is running as long as you avoid hard acceleration.

Road noise is well isolated, too, which helps make the Ampera a refined cruiser. There is some wind noise, but it's noticeable only because there's so little sound from elsewhere.

The good news doesnt end there, because the Ampera is also a remarkably flexible performer. The electric motor delivers its full 273lb ft of torque from zero revs, so the pick-up is instantaneous and youre never left short of oomph.

The regenerative brakes do take some getting used to, though, because the amount of braking force doesnt directly correlate with how hard you press the middle pedal. The steering is also vague around the straight-ahead, although it is light and accurate otherwise.

Theres a fair amount of body lean in bends, but the Ampera does a good job of soaking up bumps and potholes when it's travelling at more than 40mph. The ride is more jittery at low speeds, though, and the low-hanging front bumper is a nuisance because it catches on virtually every speed bump.

Whats the 2012 Vauxhall Ampera like to drive?
The cabin has some suitably high-tech features, including a display detailing your energy consumption.

However, the rest of the dashboard is a bit of a mess, because its littered with touch-sensitive markings (rather than conventional buttons), which are difficult to hit at a glance and often slow to respond. The hard cabin plastics arent particularly classy, either, but they look smart and feel solid.

There's loads of adjustment in the seat and steering wheel, so it's easy to get comfortable. However, all-round visibility is poor; the thick windscreen pillars restrict your view at junctions and roundabouts, and the small rear screen means youd be lost without the standard-fit parking sensors.

There are only two seats in the back, but they are surrounded by plenty of head- and legroom, so four adults can travel in comfort. The boot is roughly the same size as that of a Ford Focus.

Even the entry-level Positiv model gets plenty of standard kit, including heated leather seats, climate and cruise control, a USB socket and eight airbags. Electron models add satellite-navigation, a Bose stereo system and a 30GB hard drive for storing your music on.

Should I buy one?
If you like the idea of owning an electric car, but your life isnt regimented enough to accommodate the restricted range that accompanies them, then Vauxhalls new range-extender could be the answer. It offers all the usual benefits of an EV over short distances, but isnt limited to such a feeble range.

Granted, its not cheap (youll have to stump up at least 32,250 even after youve factored in the Governments 5000 electric car grant), but if you mostly stick within the pure electric range youll save a fortune in fuel. If youre a company car driver youll also pay company car tax at a rate of just 5% half that of the cleanest conventional petrol cars.

You neednt worry about the Amperas unorthodox mechanics, either, because it comes with a 100,000-mile unlimited-period warranty, while the battery is covered by a separate eight-year warranty.

That said, if you mainly do long journeys, the Ampera probably isnt for you. In range-extending mode we managed just 34.9mpg, so buying one only makes sense if most of your trips can be covered off in pure electric mode.

If thats the case, only one big stumbling block remains: the fact that the Ampera costs a whopping 2250 more than the virtually identical Chevrolet Volt.