More for you |
Peugeot 205: best cars in the history of What Car?Company car drivers want electric carsConfessions of a car salesmanBest cars in What Car? history: how they've evolvedNew Peugeot 208 vs Audi A1 vs Mini hatchback
Home
News
2013 Peugeot 208 XY review
news 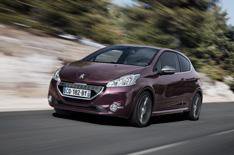 The new Peugeot 208 XY is the company's answer to the Citroen DS range.

The XY is intended to be a more exclusive, luxurious take on the standard 208 hatchback, and offers revised steering, a raft of unique styling details and a comprehensive spec list.

As is the norm with cars such as this, there are a host of personalisation options via decals and stickers.

Whats the 2013 Peugeot 208 XY like inside?
Surprisingly upmarket, with unusual metallic leather detailing and a high-set colour touch-screen that forms the focal point of the cabin.

Metal-finish climate control switches add to the classy feel, as do the heavily bolstered seats trimmed in contrast-stitched materials.

There are some scratchy plastics on the doors, but overall the XY is lavishly trimmed by supermini standards.

The glass roof helps the XY feel roomier than lesser versions of the 208, too, although rear legroom is slightly compromised by the chunky front seats.

The 208 XY is available only as a three-door, so rear access isn't great.

Whats the 2013 Peugeot 208 XY like to drive?
Better than the standard hatch. While the suspension is unchanged, the XY's revised steering has more progressive responses and a slightly weightier feel characteristics that make the car feel less nervous at speed.

Ride comfort has also been improved, with the help of wider tracks, shared with the new 208 GTi. They make the car feel more planted and allow it to soak up most bumps in the road, although its a bit unsettled over smaller creases and cracks.

We tested the more powerful diesel, which is the most expensive version of the XY, and isn't available in the standard 208. This is a shame, because it's a flexible performer that averages 74.3mpg, although it does sound a bit gruff.

Should I buy one?
The Peugeot 208 XY is a likeable supermini, but one that's tricky to justify.

It will cost you around 1700 more than the equivalent Allure-spec 208 and while this doesn't feel quite as classy, it offers most of the same equipment and very similar looks.

More to the point, the XY costs the same sort of money as an Audi A1 or Mini, even after you've added a few choice options to make up for their inferior standard kit. Both rivals are much better to drive, too.

Ultimately, if the XY evokes a burning 'want-one' factor for you, it wont disappoint, but there are better options out there.