The diesel saloon class is a crowded one, with some seriously competent models. The revised Optima needs to offer a better ride, improved refinement and low enough emissions to be in with a chanc... 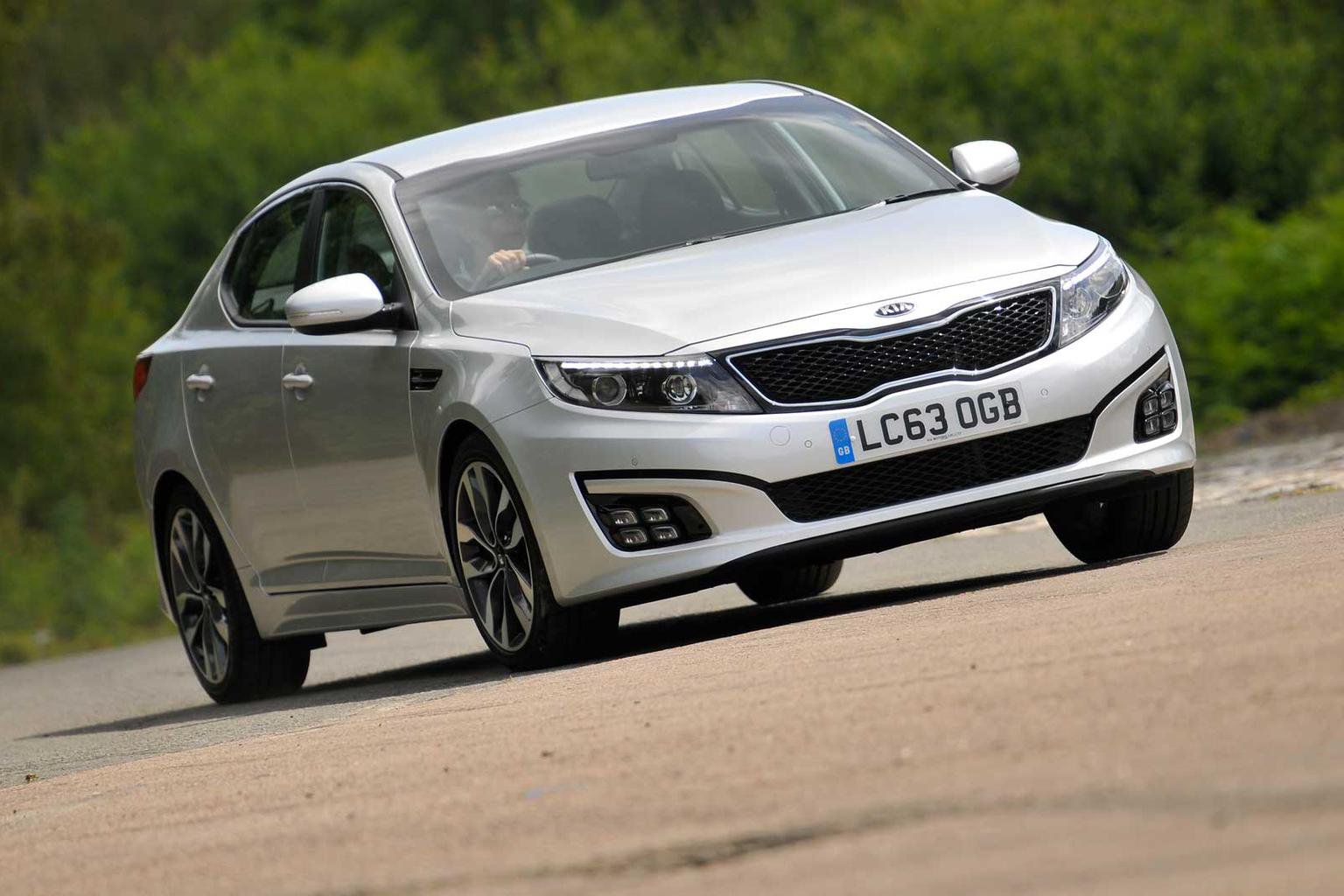 To keep it up to date with the recently revised Soul and Sportage SUVs, the Kia Optima has been given a few minor tweaks for 2014 to improve both the refinement and sharpen the already striking looks.

Subtle changes to the suspension have been made to soften the ride, while extra sound deadening has been fitted to reduce noise in the cabin. New driver aids on top spec models also enhance the Optima's safety credentials.

Kia doesn’t offer the petrol Optima in the UK, so the only choice is the 1.7-litre diesel with 134bhp, mated to a six-speed manual or six-speed automatic gearbox.

The unaltered 1.7-litre motor is still grumbly and coarse when accelerating, and it forces you to wait until around 2000rpm for its pulling power to arrive, which is delivered over a relatively narrow band of revs.

Because it feels so flat outside this window, the Optima suffers a sudden surge in power, and the manual gearbox on our test car had to be worked hard to keep the engine in its sweet spot.

The manual 'box itself isn't as precise as those of rivals such as the VW Passat and Ford Mondeo, and all manual cars are fitted with an engine stop-start system that restarts smoothly enough, but sends judders into the cabin when stopping. An auto 'box with steering wheel paddle shifters is available for an extra £1555.

Body control is adequate, but the Optima is still not as engaging through corners as the Ford Mondeo, and the steering feels quite vague around the straight-ahead and consistently, but artificially weighted.

Kia has tried to improve the Optima’s previously lumpy ride with new rear shock absorbers, but this remains an area in which it fails to keep up with the class best. Sharp potholes send thuds into the cabin, and it feels similiarly harsh over larger bumps such as sleeping policeman, too.

There's now also more sealant around the dashboard and thicker carpeting to help refinement. As a result, road noise is only an issue on coarse surfaces, but as speed increases, wind noise is still intrusive around the windscreen pillars.

The cabin remains largely the same, and feels solid, with soft-touch plastics in many areas. However, some of the materials, especially by the handbrake and gear lever, feel cheap by comparison.

Most of the controls are logically laid out; on '2' spec cars and upwards, a new larger digital screen sits between the speedo and rev counter dials and offers customisable trip information.

There’s also a seven-inch touch-screen located centrally on the dashboard that handles infotainment and displays the picture from the reversing camera. The system is reasonably easy to use, but with no rotary controls and few shortcut buttons, you can't really use it without taking your eyes off the road.

There's a generous amount of space in the front, and our car's eight-way adjustable driver's seat made it easy to find a good driving position, although, as with the pre-facelift model, tall drivers may wish the seat went a bit lower down. Rear headroom is average, but plenty of legroom and a flat floor mean rear-seat passengers will find little to complain about.

The boot is big, with a 505-litre load bay behind the rear seats, but this is compromised slightly as the rear seats leave a substantial lip and a small aperture when lowered. A full-size spare wheel is standard on all models.

In a class full of accomplished saloons being bought mainly as company cars, it's hard to recommend the Optima over its competitors from Ford and Volkswagen.

Improvements to the refinement have gone some way to making the Optima more relaxing to drive, but it still doesn't offer the space, sharp handling, or - most important - the efficiency or low emissions of its rivals.

Ultimately, the Optima is competitively priced considering its very generous standard kit list, but its limited engine choice will put off those seeking extra performance or a cheaper company car.