The Volvo S90 is an all-new large executive saloon from the Swedes, but it takes on some of the most accomplished cars on sale. Does it stand out?...

Think Volvo S90, and up until now images of 1990s boxiness springs to mind. But not any longer, because the sleek car you see in these images is Volvo's brand new S90.

It's a four-door saloon built on the same platform as the Swedish firm's XC90 large SUV and the V90 estate we drove recently. It shares the V90's engine options too; for now, a 2.0-litre D4 diesel with 187bhp or the engine we're driving here, another 2.0 diesel, called D5 and with 237bhp and all-wheel drive as standard.

Large executive cars have a lot to live up to, since their buyers demand a sharp drive, hushed cabin, good ride comfort and luxurious materials and equipment. With its brand new platform, uplifted cabin and generous standard kit, Volvo hopes its S90 will tempt buyers away from German rivals such as the BMW 5 Series and Audi A6. 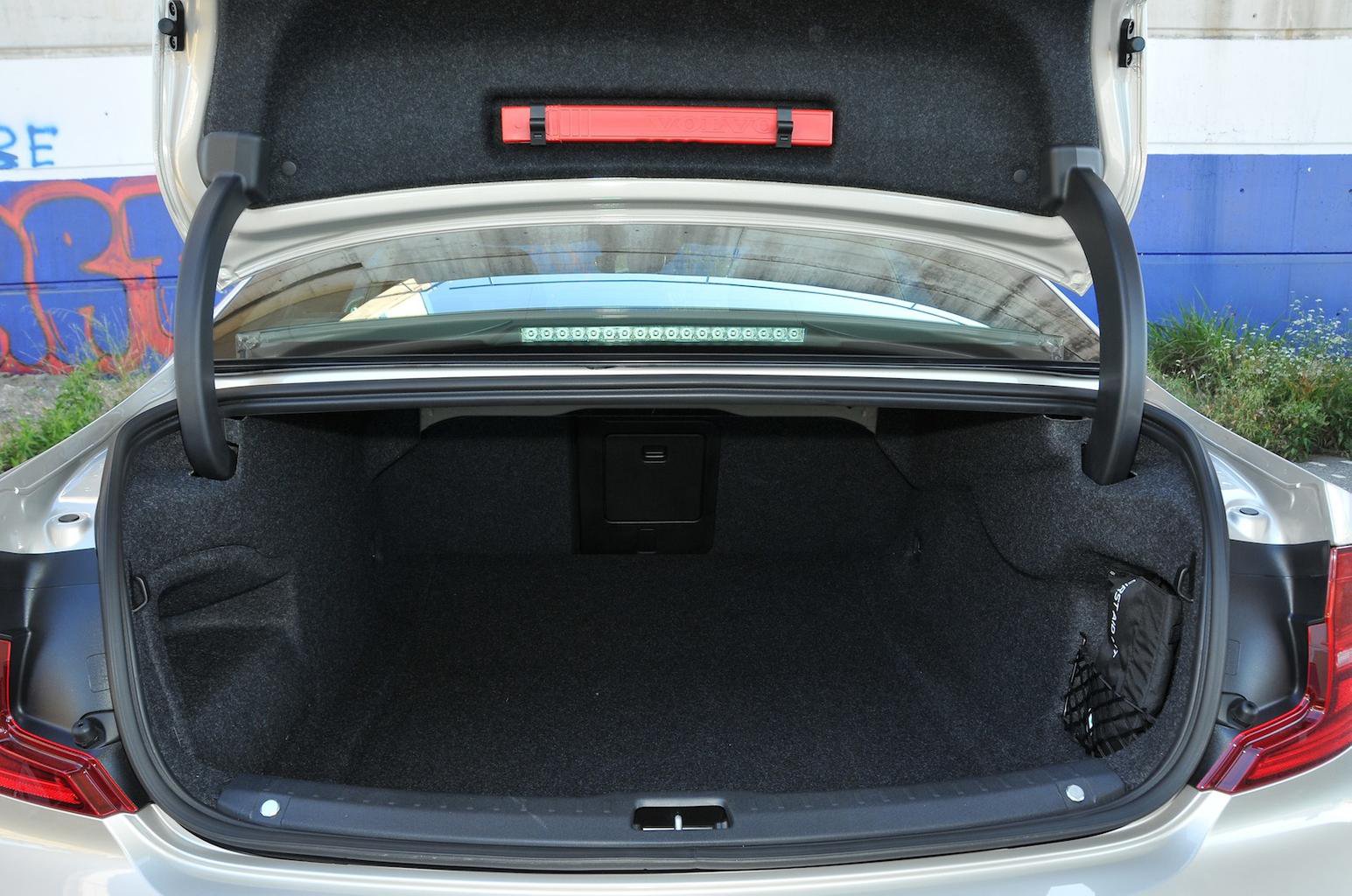 Volvo's D5 diesel engine features the manufacturer's so-called Power Pulse technology, which uses compressed air to help its turbocharger kick in more eagerly. It works, because there's almost no pause before the D5 pulls hard from low revs, and it carries on pulling hard towards its redline. The sometimes lethargic eight-speed automatic gearbox is the only slight downside.

The engine remains pretty hushed, too, unless pushed beyond 4000rpm, and it never causes any vibration through the controls. In fact, the S90 is a very relaxing long-distance companion, because there's so little wind noise at speed and its diesel engine settles nicely, while our car's optional (£1700) 20in alloy wheels were heard only over coarse surfaces. 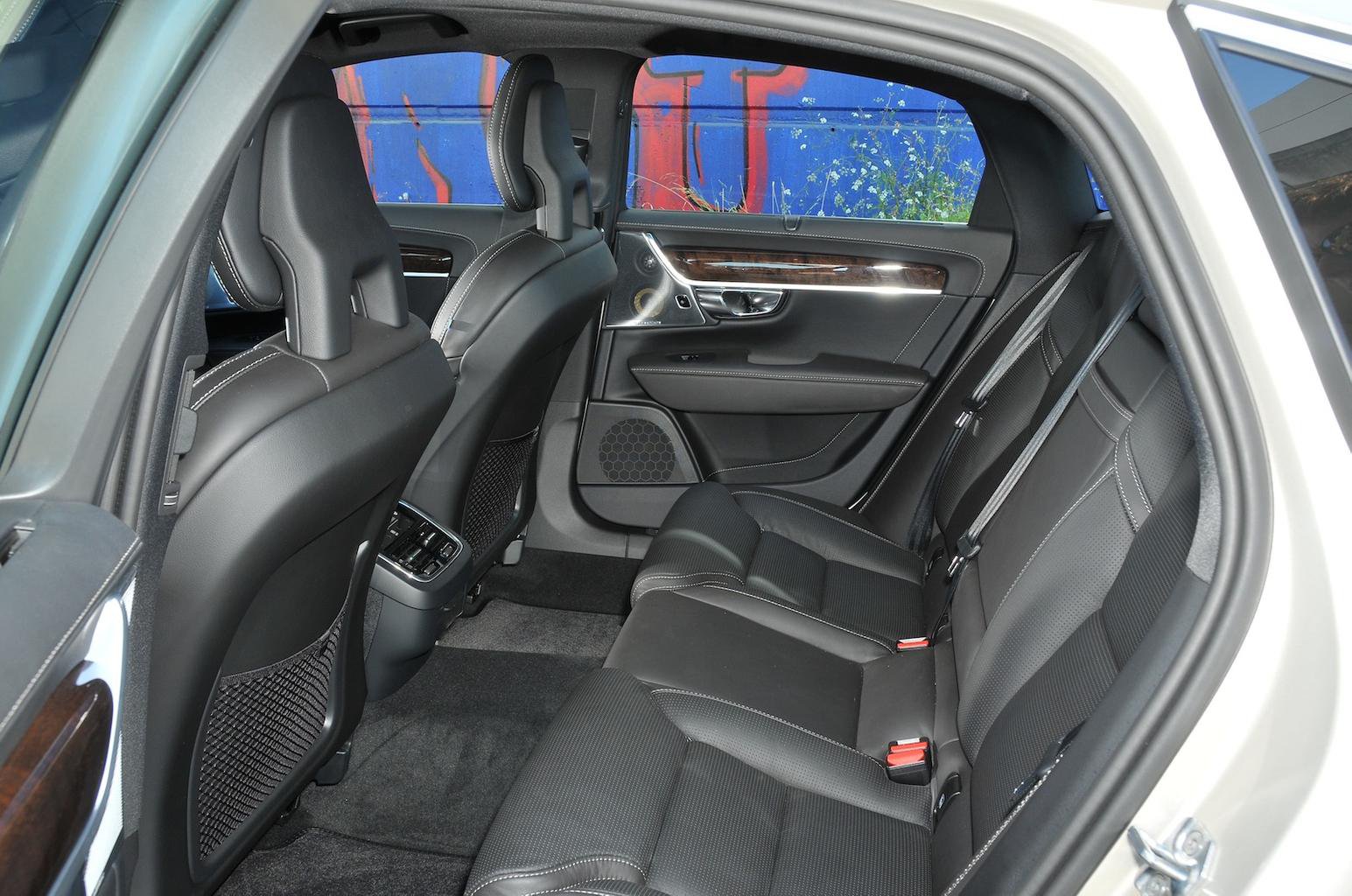 The S90 has four driving modes, which allow you to stiffen the suspension in Dynamic mode, as well as increase throttle response and steering weight, and our car also came with the £950 optional air suspension fitted. In truth, the S90 feels better suited to its Comfort mode given that, despite brilliant traction from its AWD system, it doesn't feel particularly eager to change direction in any mode.

Indeed, it's in Comfort mode where the S90 shines – or at least it did on our Spanish test route with that air suspension fitted. The body stays well controlled over high-speed undulations while at lower speeds most broken roads taken are sponged up easily, although there was the odd thump over sharp-edged ruts, so a more challenging UK drive will ultimately cement our opinion. 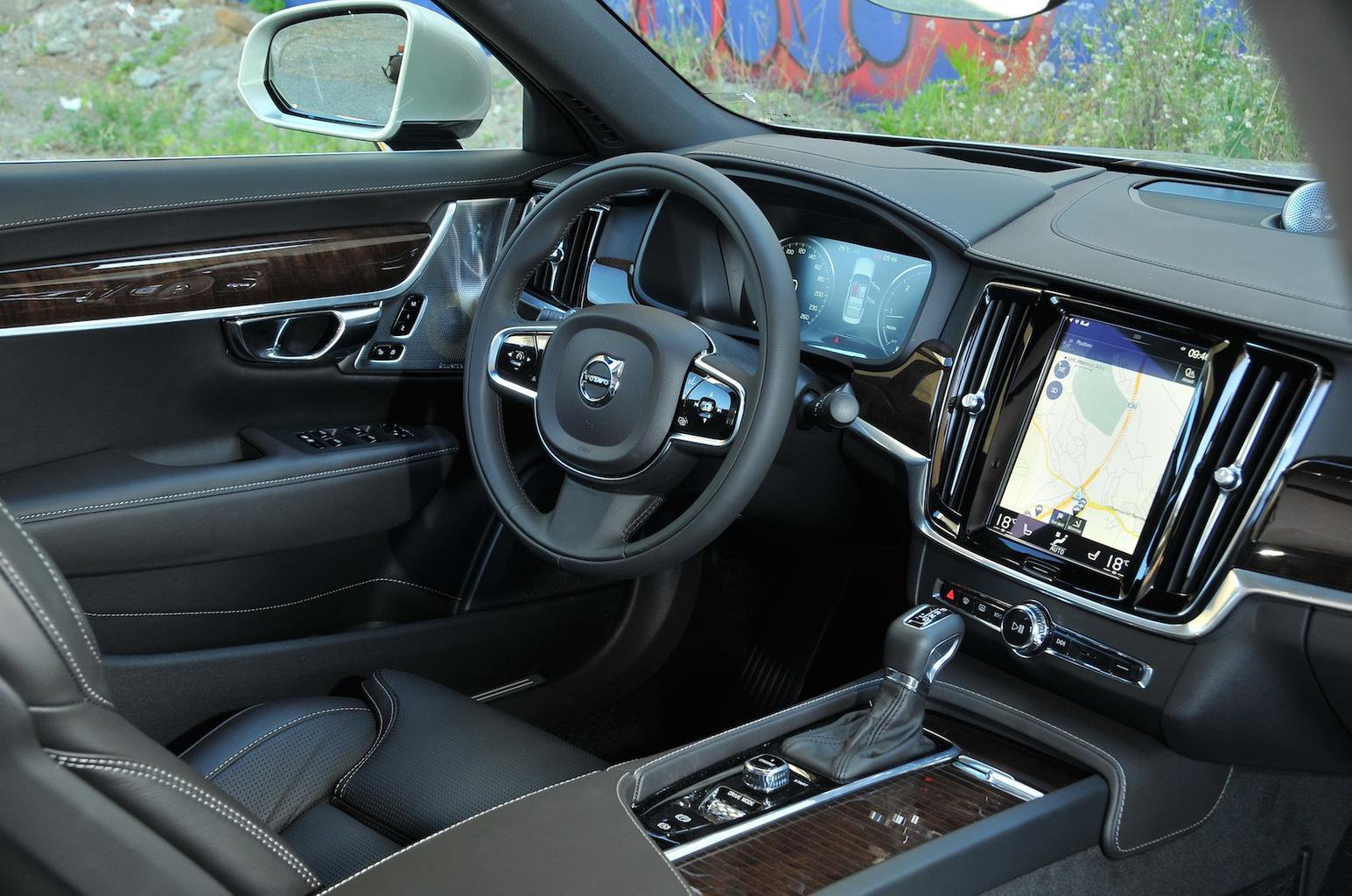 Certainly not short on space, because four adults will have no problem getting comfortable. The driver benefits from a superbly supportive and adjustable seat and widely manoeuvrable wheel, while both front occupants can stretch out. Another two adults in the rear will enjoy excellent head and leg room, although a third adult would be a squeeze.

A 500-litre boot sits behind the rear seats, which is slightly smaller than that of BMW 5 Series or an Audi A6. Access to the S90's boot is about on a par with its rivals', which is to say its saloon opening is more restricting than that of a hatchback or estate. The rear seats split 60/40 and fold down flat by pressing buttons located behind passenger-side rear headrest. 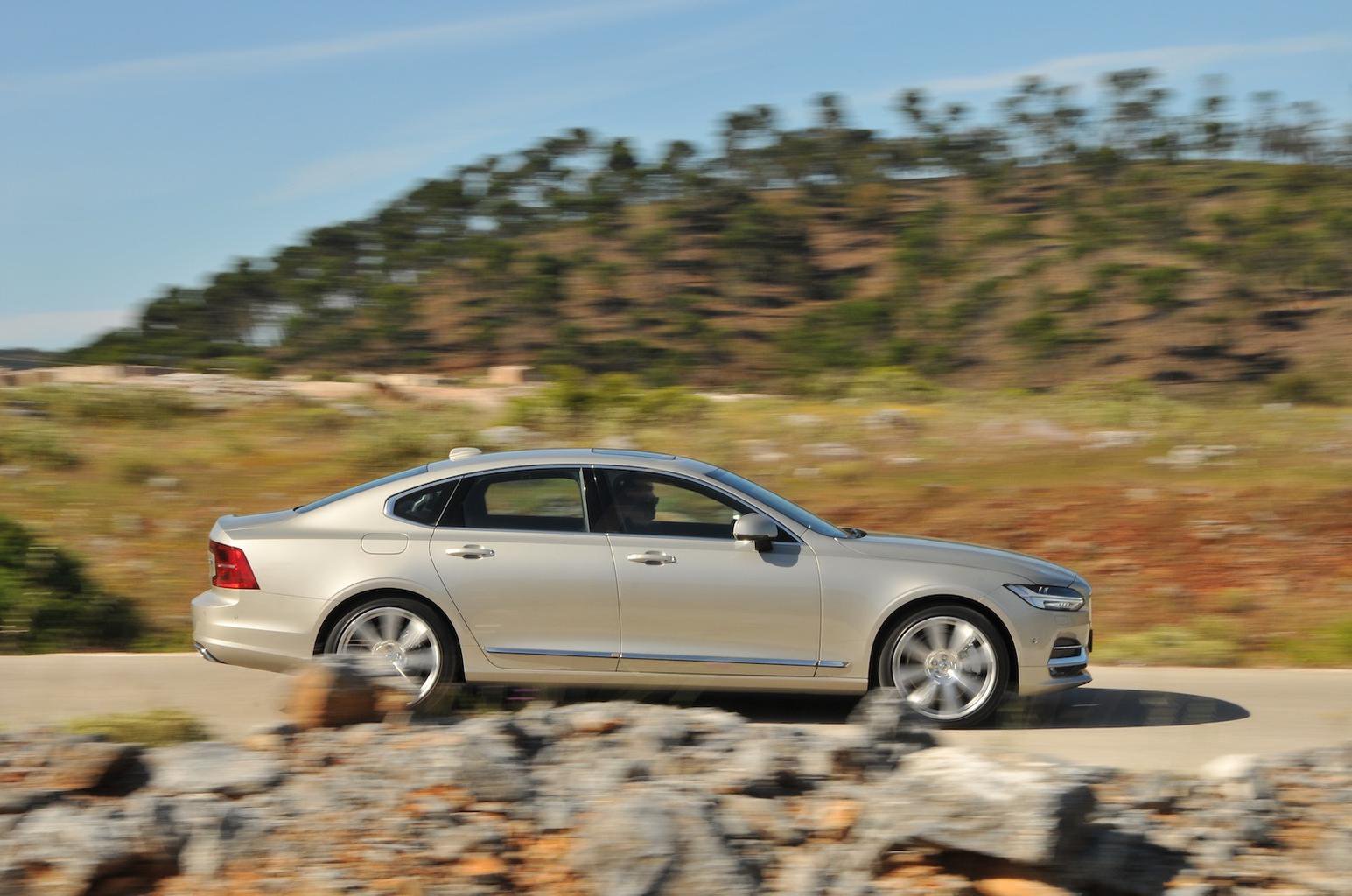 Volvo took interior quality seriously with the S90, even stealing Bentley's head of interiors to work on the project. We tried Inscription trim, and there's no doubting that its one of the finest executives for quality around, just pipping the soon to be replaced BMW 5 Series and coming close to an Audi A6.

However, the Germans' infotainment systems remain preferable, with their more intuitive rotary-dial control systems. That said, Volvo's 9.0in portrait touchscreen system is one of the finest touchscreens available, having a beautifully high-resolution display and being pleasingly responsive. It's just a shame that some of the small on-screen buttons are a little tricky to hit confidently on the move.

At least the standard equipment list is worthy of large-executive status, climate control, heated leather seats, Bluetooth, sat-nav and DAB radio thrown in. Volvo has also upgraded its standard city-braking technology to include large animal detection (on top of spotting pedestrians, cyclists and cars) and added a standard system that helps to keep you in your lane on the motorway. 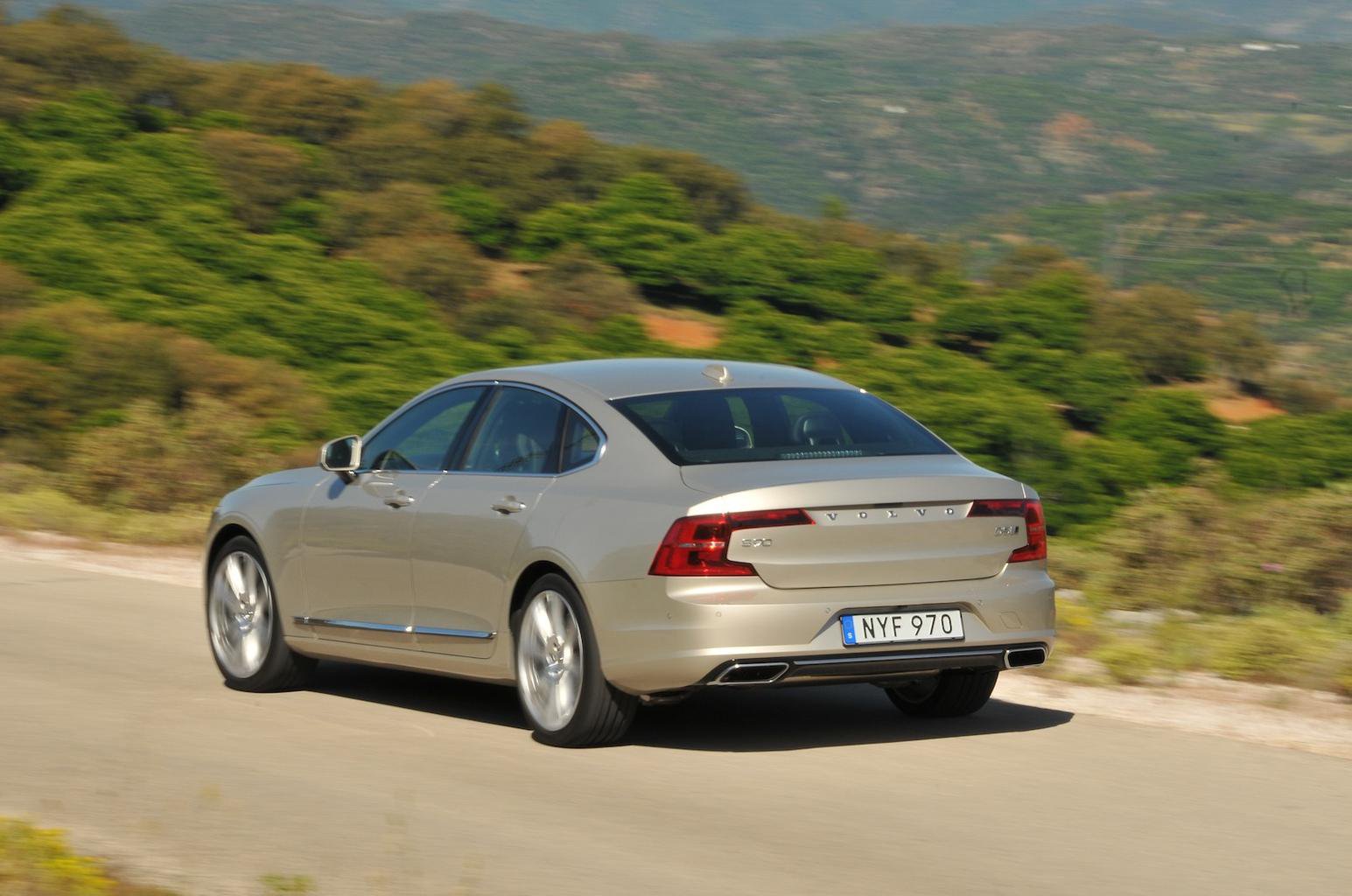 You should certainly have the S90 on your test drive list. The version we tried has the pace, quality, equipment, comfort and quiet, spacious cabin to worry the best large executives. We still think BMW's 5 Series is better to drive overall and Audi's A6 has the slightly plusher cabin. Both these rivals have the better infotainment systems, too.

So the S90 scores four stars for now, but a drive of the cheaper D4 could see another added. That car costs less to buy, emits less CO2 and uses less fuel - making it more attractive to company car buyers - and on smaller wheels it's possible it could be even more comfortable.