Is Alfa's new 4C good enough to dethrone one of our favourite sports cars, the Porsche Cayman? We drive them back-to-back to find out... 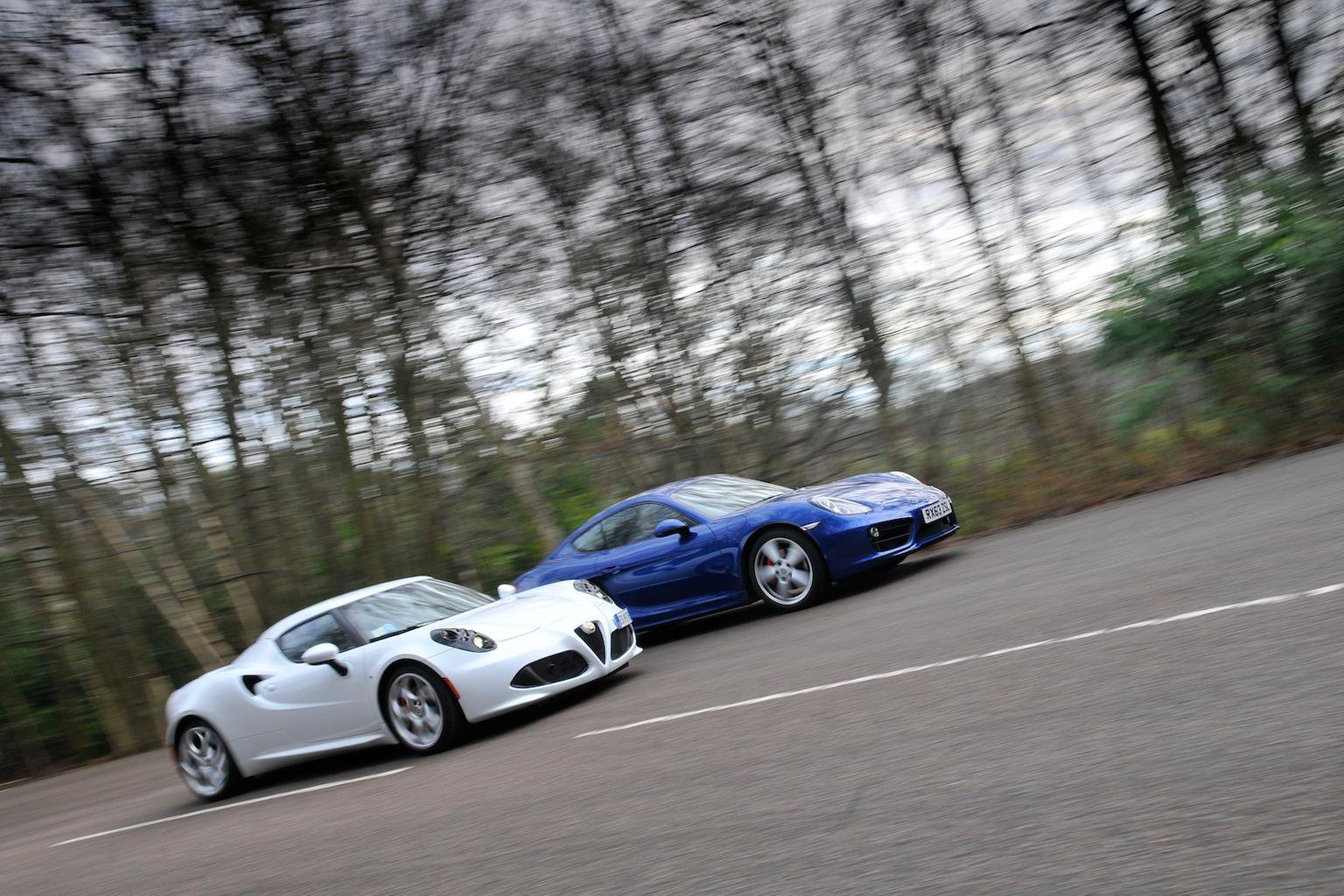 Alfa Romeo has never had a problem building cars that are stunning to look at, but you have to go back a long way to find one of its models that was genuinely exciting to drive.

Well, the new 4C could be about to change that. It’s Alfa’s first mid-engined sports car for decades, and its high-tech construction and relatively small engine give it a huge weight advantage over most of its rivals.

In fact, the 4C weighs 350kg less than a Porsche Cayman S – a car that we’ve previously described as ‘the best pound-for-pound sports car in the world’. So, do the Alfa’s on-paper credentials make it great on the road?

The Alfa might have a big weight advantage over its German rival, but it also has a lot less power. The different approaches result in equally eye-widening straight-line pace, with both cars accelerating from 30-70mph in just under four seconds.

However, while the Cayman pulls hard the instant you push down on the throttle, the 4C relies on a turbocharger, so there’s often a delay in power delivery. What’s more, the Alfa’s engine runs out of puff above 6000rpm, whereas the Cayman keeps accelerating hard until almost 8000rpm.

The Porsche sounds better, too, producing a bassy growl at low revs and howling loudly as you accelerate hard. The Alfa is seriously noisy – especially with the optional sports exhaust (£450) – but the sound it makes isn’t particularly tuneful.

Both cars have twin-clutch automatic gearboxes, which also allow you to change gear manually using paddles behind the steering wheel. Both ’boxes respond quickly to commands when you’re driving hard, but the Cayman’s is much smoother around town.

Come to a corner and you immediately get a sense of just how light the 4C is. It reacts instantly to steering inputs and there’s barely any body roll.  Unfortunately, the front end of the car starts to run wide earlier than you might expect. The Porsche, meanwhile, stays perfectly balanced through corners, and also has more grip, so you can ultimately carry a lot more speed through bends.

Unlike most modern cars, the 4C doesn’t have power steering, so you get a real sense of connection with the front wheels. Unfortunately, there’s lots of kickback through the Alfa’s steering over bumps, and the whole car lurches over quick camber changes.

The Porsche, on the other hand, remains surefooted no matter how bad the road surface. True, its steering doesn’t provide as much natural feedback as the Alfa’s, but it’s super-accurate, allowing you to place the car precisely in corners.

Both cars ride pretty well by sports car standards. The Porsche’s more relaxed gait makes it the more comfortable car at higher speeds, but the Alfa glides over sharp-edged bumps and potholes with more forgiveness around town – even with the optional sports suspension (£1000).

Getting into the 4C requires a fair amount of flexibility because you have to clamber over a chunky sill and lower yourself practically onto the floor. The driver’s seat adjusts only for length (not height), although the figure-hugging seats and well-positioned pedals mean getting comfortable shouldn’t be a problem.

There’s a lot more adjustment in the Cayman’s driving position, so it’s even easier to get the perfect set-up. You sit higher than in the Alfa, but still feel like you’re in a proper sports car, thanks to the wraparound dashboard and big, bold instrument dials.

What’s more, the Cayman’s cabin is classy enough to put many executive saloons’ to shame. The dashboard is made of dense, soft-touch plastics, and nearly all of the controls are thoughtfully laid out and easy to use. The one exception is the seven-inch touch-screen infotainment system, which has a slightly confusing menu layout.

Things aren’t anywhere near as smart in the Alfa, because any soft plastics have been shunned in the name of saving weight. However, most of the controls are simple to operate and the digital display tells you all you need to know. It’s just a shame the stereo is so underwhelming; even the £300 optional system sounds poor.

The Alfa’s boot is tiny – capable of swallowing a couple of small overnight bags but that’s about it. There’s no hydraulic strut to keep the boot lid open, either, so you have to prop it open.

The Porsche, meanwhile, has two boots – a small one under the bonnet and a bigger one at the rear of the car – so there’s ultimately a lot more space.

What will they cost you?

You won’t get any dealer discount on either car, so the Alfa undercuts the Porsche by nearly £6000. The 4C is also predicted to depreciate a lot more slowly, and will cost you less to service, tax and fuel. In fact, take into account all the costs you’ll face during the first three years of ownership, and the Alfa works out more than £9k cheaper.

Neither manufacturer has exactly been generous with standard equipment. You get air-con, electric front windows and a stereo with both cars, but have to pay extra for rear parking sensors (which you’ll definitely want), a USB socket and cruise control.

The 4C does at least come with Bluetooth (a £446 option on the Cayman), but gets only cloth seats, whereas the Porsche has part-leather.

Neither car has been crash-tested by Euro NCAP, but the Porsche has the higher airbag count (four versus two).

Despite being much lighter than the Cayman, the 4C is ultimately less capable, and its tendency to run wide in corners robs you of some of the fun you’d expect from a rear-wheel-drive sports car. The fact the Cayman is also much easier to live with only increases its margin of victory. However, the Alfa’s incredible agility, stunning looks and slow depreciation give it lots of appeal.

Against Not much kit; limited steering feel

Against Front-end grip; wayward handling on most roads; jerky ’box

Verdict Good in some areas, weak in others