* Based on Toyota iQ * Aston values in tiny package * Concept car in development... 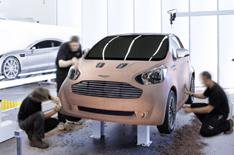 Aston Martin is developing a concept car based on the tiny Toyota iQ, called the Cygnet.

The car is designed to be 'a new luxury commuter concept', according to Aston Martin, 'which will offer customers a distinctive, intelligent and exclusive solution for urban travel in style and luxury'.

The Cygnet would be built at Aston Martin's factory in Gaydon, Warwickshire, and priced from around £20,000. Sales could start before the end of 2010, with production planned for 2000 vehicles a year.

The company expects most buyers to already own a full-sized Aston Martin; CEO Dr Ulrich Bez described the Cygnet as an 'exclusive tender to a luxury yacht'.

Styling-wise, the car will be based on Toyota's iQ, but with an Aston grille, leather interior, different wheels and tyres, and unique trim.

The new city car will also help the company achieve a lower average fuel economy across its range, as required by upcoming European Union legislation.