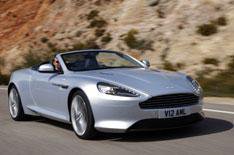 It doesn't get much more glamorous than an open-top Aston does it? Yet you could be forgiven for getting a bit confused by this one: the new £159,995 Virage Volante.

Why? Because the Virage Volante is designed to fill the gap between the DB9 and DBS. It has more power, sophistication and is more fun to drive than the cheaper car, but it's not as brash nor unforgiving as the DBS.

Just like the Virage Coupe, it's designed to appeal to those buyers who want the middle ground and is based heavily on the DB9. Yet the company's designers have polished it considerably. It has a more aggressive look than the DB9 and is shorter and wider, too.

The all-aluminium chassis has been upgraded considerably, with electronically adaptive suspension and standard ceramic brakes. The 6.0-litre V12 has had a power upgrade and there have been revisions to the standard six-speed auto 'box.

Just like the Coupe, the open-top Virage has a schizophrenic personality, but this is a good thing. With the gearbox in full automatic mode it's a lazy, plush GT that's capable of laid-back cruising to more than match the DB9. Roof-up it's well insulated, so even at speed it's almost as hushed inside as the Coupe.

Press the dash-mounted Sport button, though, and the 6.0-litre V12 wakes up, gear changes get quicker and there's more of a raspy, rumbling exhaust note.

You're also made aware of what a seriously quick car this is, even though it's around 100kgs heavier than the coupe.

The cloth-top version doesn't corner quite as crisply as the Coupe and you get the odd shudder through the steering wheel and pedals. It doesn't feel quite as sharp as a Ferrari California, either. The Volante's engaging when pushed hard and the handling doesn't compromise the ride quality, because it feels supple enough on every type of road surface.

It's hard not to love the Virage's cabin, which has the same high levels of craftsmanship as all the latest Astons. Leather, stitching and other materials all look and feel top-notch and so they should at this end of the market.

Despite the opulence, it isn't perfect though. The cramped rear seats are useless for anything other than hand luggage, which is just as well because the electric roof mechanism eats away at boot space.

The dashboard layout is the same as the DB9's and despite a noticeable step up in quality over the cheaper car, it's beginning to look its age. The problem is mostly down to the fiddly and confusing controls, which are tricky to operate on the move. One bright point, though, is a much improved sat-nav system, which is far better than the Volvo-derived unit it replaces.

Should you buy one?

There's a good chance that if the Aston attracts you'll forgive it any foibles. It's not as sporty as a Ferrari and way more expensive than a Jag XKR Convertible, but if you're in the mood nothing will appeal more. Or be quite as glamorous.