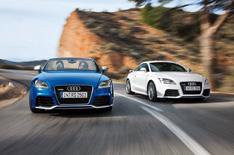 Audi has released more pictures of the TT RS, ahead of the car's debut at the Geneva motor show next month.

The pictures released today show both the Audi TT coupe and the convertible models. Previously the company had revealed just close-up teaser images.

Audi says the car will be powered by a five-cylinder 2.5-litre engine that produces in excess of 300bhp.

Few other details have been released, although Audi claims that the car can go from 0-62mph in under 5.0 seconds. Top speed will be limited to 155mph.

Full details of the TT RS will be released on March 3 at the Swiss show.

Hear the Audi TT RS in action here
Click below to get a sneak preview of what the hot new Audi TT RS will sound like.