If the first thought that enters your head when you gaze upon the current Audi A3 is  “Lamborghini Countach”, you’re either standing very far away from it or are part of Audi’s design team. You see, they quoted the legendarily angular Italian supercar as a design reference for its latest family car.

Taking the marketing spiel with a pinch of salt, it’s clear that the design of the latest A3 has generally played it safe, choosing evolution, rather than revolution. Audi’s similarly cautious approach to the rest of the car is a good omen; after all, the previous Audi A3 was one of the outstanding family cars of the past decade – insurmountably impressive in every area, and winning group tests against newer rivals even at the end of its life.

Thankfully, it’s clear that the A3 hasn’t thrown that winning formula out of the window. As well deliberately looking familiar, today’s car uses an updated version of the previous car's underpinnings, which it shares with the latest Volkswagen Golf and Seat Leon.

It offers you a choice of petrol, diesel, mild-hybrid and (shortly) plug-in hybrid versions, with various different suspension setups and trim levels available. But just how good is the new Audi A3? Can it live up to the exacting standards of its forebear? And if it wins you over, which is the best version to go for?

It'll have to be good if it's to beat the latest BMW 1 Series and Mercedes A-Class, so read on to find out all about it. And, for a hassle-free deal on your next new car, head over to our New Car Buying pages.

The three engines that we’ve tried so far return performance that’s on a par with what you can expect from equivalent rivals. Predictably, the 114bhp 30 TDI needs to be worked quite hard to make quick progress, while the 148bhp 35 TDI is noticeably stronger and proves particularly relaxed on motorway runs.

The 148bhp 35 TFSI, though, is our pick of the line up. It’s cheaper than the 35 TDI but still offers strong, impressive performance right throughout the rev range. For those who want true hot hatch levels of performance, an Audi S3 is on the way.

The suspension you’ll find under your A3 depends on its engine and the badge it has on the back. Lower-powered models (with less than 148bhp and the number 30 in their badge) have a less sophisticated rear suspension setup than the more powerful versions (badged with a 35). If you go for an S line model, you also get lowered, firmer suspension by default.

So far we have only driven the 30 TDI S line. Being the stiffer option, S line suspension gives the A3 an underlying firmness to its ride, but it's a little more forgiving than the equivalent BMW 1 Series M Sport, cushioning you impressively at all speeds. When you do hit rough stuff, the impact is over very quickly, with no bobbing or bouncing around afterwards, which is a trait that the Mercedes A-Class suffers from.

We suspect, though, that the sweetest-riding A3s will be the softer Technik and Sport versions. If you still want S line but without the firmer edge, there is a no-cost option to delete the stiffer suspension but keep the sportier looks. 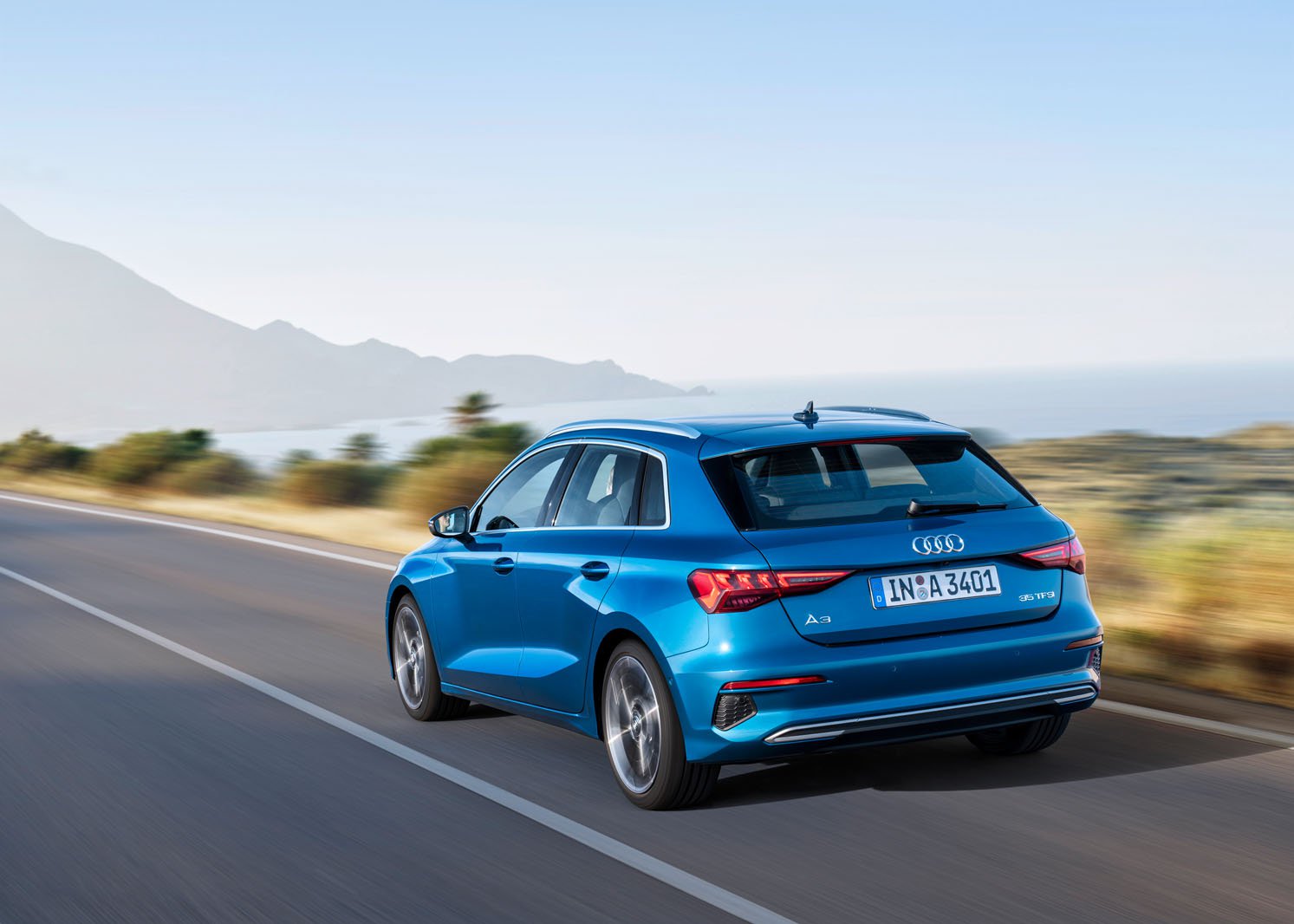 The A3 has plenty of grip and is agile, dealing with quick changes of direction in a very accomplished, unflustered manner. And those fitted with S line suspension corner very flatly indeed.

The steering isn’t perfect, though. It’s accurate and precise most of the time, except just when you begin to turn in to a corner. At that moment it feels a little vague, which is a deficit compared with the eager-steering 1 Series. Nor does the A3’s steering have quite the progressive weight build-up  the A-Class’s boasts.

You can change how it feels by engaging Sport mode, but the extra heft this adds feels unnatural. Ultimately, the A3 is always pleasant to drive, but the 1 Series remains the best driver’s car at the premium end of this class, with the Ford Focus the best overall in the class.

All engines are impressively quiet, but the fact that you need to work the 30 TDI diesel harder than the more powerful engines makes it the first to show signs of strain. Up at 70mph it's nice and quiet inside, with wind and road noise a match for the 1 Series' high-speed tranquillity. The A-Class has more road roar and irritating suspension noise.

The six-speed manual gearbox provides precise shifts that, with the progressive clutch and brakes, make the A3 a breeze to drive smoothly. Less so the 35 TFSI models with their mild hybrid system. This harnesses the energy that would usually be wasted during braking (and uses it to charge a tiny battery) but it gives the brake pedal staged feel. Initially, it's unresponsive, then suddenly bites in an abrupt fashion that makes stopping altogether jerkier.

Audi’s S tronic seven-speed automatic gearbox is very impressive. It shifts between gears with a similar slickness to the 1 Series’, instead of the clunkier feel of the automatic used in the Mercedes A-Class.

Pace aplenty, great handling plus a healthy dose of practicali...

Good to drive, but let down by a fiddly infotainment syst...