Previous incarnations of the BMW 1 Series had something unique to offer the family car class. Something that was more typical of your average sports car, actually: a rear-wheel drive layout, which, it was claimed, maximised its handling prowess to delight all you keen drivers out there. So you might be surprised to learn that BMW ditched that philosophy when it switched to this third-generation model.

Yes, the current BMW 1 Series has the same front-wheel-drive layout that’s used by every other family hatchback, although four-wheel drive is also available with some of its pricier variants, including the M135i, which you can read about separately by clicking the link. On paper, then, the 1 Series lost what set it apart from the Audi A3 and Mercedes A-Class, and that caused bit of an uproar among enthusiasts across the land.

But does it really matter? Well, not really; the truth is that previous versions of the 1 Series weren’t actually as good to drive as the hype suggested. So, with mechanicals lifted largely from the BMW X1 and X2 SUVs, not to mention a whole bunch of Minis, can the latest 1 Series finally lay claim to being the best-handling family car? And does it fix the space and practicality issues that, if you’ve owned one of the previous models, you’ll be acutely aware it suffered from?

That’s what you're about to discover if you keep reading through this review, where we’ll tell you all about how the BMW 1 Series fairs against its key rivals, and which engine and trim makes the most sense.

And if you do decide the BMW 1 Series is the car for you, make sure you head over to our New Car Buying pages to see how much we could save you off the list price, without any haggling involved.

Of the petrol engines – and of the entire range, in fact – we'd recommend going for the 118i. It's a 1.5-litre, three-cylinder with 138bhp that’ll get you from 0-62mph in 8.5sec. Yes, that’s slightly slower than the Audi A3 35 TFSI and a lot slower than the Mercedes A200, but, if you're not bothered about being the quickest away from the lights, it's brisk enough. More pertinently, you’ll find it’s keen to rev out and flexible, pulling well from down in the rev range, making it an easy and relaxing companion for everyday driving.

The 116d is the entry point into the diesel engine range, but the 118d is the biggest seller and we can see why. It feels punchier and more eager in town or on motorways, and makes a fine all-rounder. That said, all its shove is concentrated in a narrower band of revs than the A200d’s, which means the 118d’s performance isn’t quite as accessible. The more powerful 187bhp 120d is quicker still, and comes with an automatic gearbox; a combination that means it can hit 62mph from a standstill in 7.3sec. That drops to 7.0sec dead if you opt for BMW’s four-wheel-drive system (xDrive).

You can read all about the M135i hot hatch, which uses a 302bhp 2.0-litre, four-cylinder unit, and how it compares to the Mercedes-AMG A35 by clicking on the link. It’s an impressive hot hatch, but as we’ll explain later, one that is upstaged by its cheaper sibling – the 128ti. This is BMW’s first front-wheel drive hot hatch and uses a detuned version of the M135i’s turbocharged 2.0-litre engine. Its 261bhp is 41bhp less than the M-car has, but the 128ti still feels pleasingly punchy, with a 0-60mph time of just 6.1 seconds.

Go for SE or Sport trim and you get the softest suspension available in the 1 Series. It doesn’t absorb surface imperfections quite as smoothly as a comparable Mercedes A-Class, but it’s still impressively cosseting and, as an added bonus, it doesn’t feel as floaty over undulating roads – great news for anyone with travel-sickness-prone kids.

Next up is the stiffer setup that's fitted to popular M Sport versions. Granted, this does exaggerate any initial jolts, but it's never crashy and manages to stay on the right side of comfortable, but the equivalent Audi A3 S line is marginally less jarring. The 128ti, meanwhile, gets a bespoke M Sport set-up that is firmer than that of the equivalent Volkswagen Golf GTI, but it still has enough give that it never crashes too harshly over bumps.

Finally, you can opt for adaptive dampers on the M Sport versions of the 118d, 120d and M135i. However, they don't represent enough of an improvement to justify the extra cost 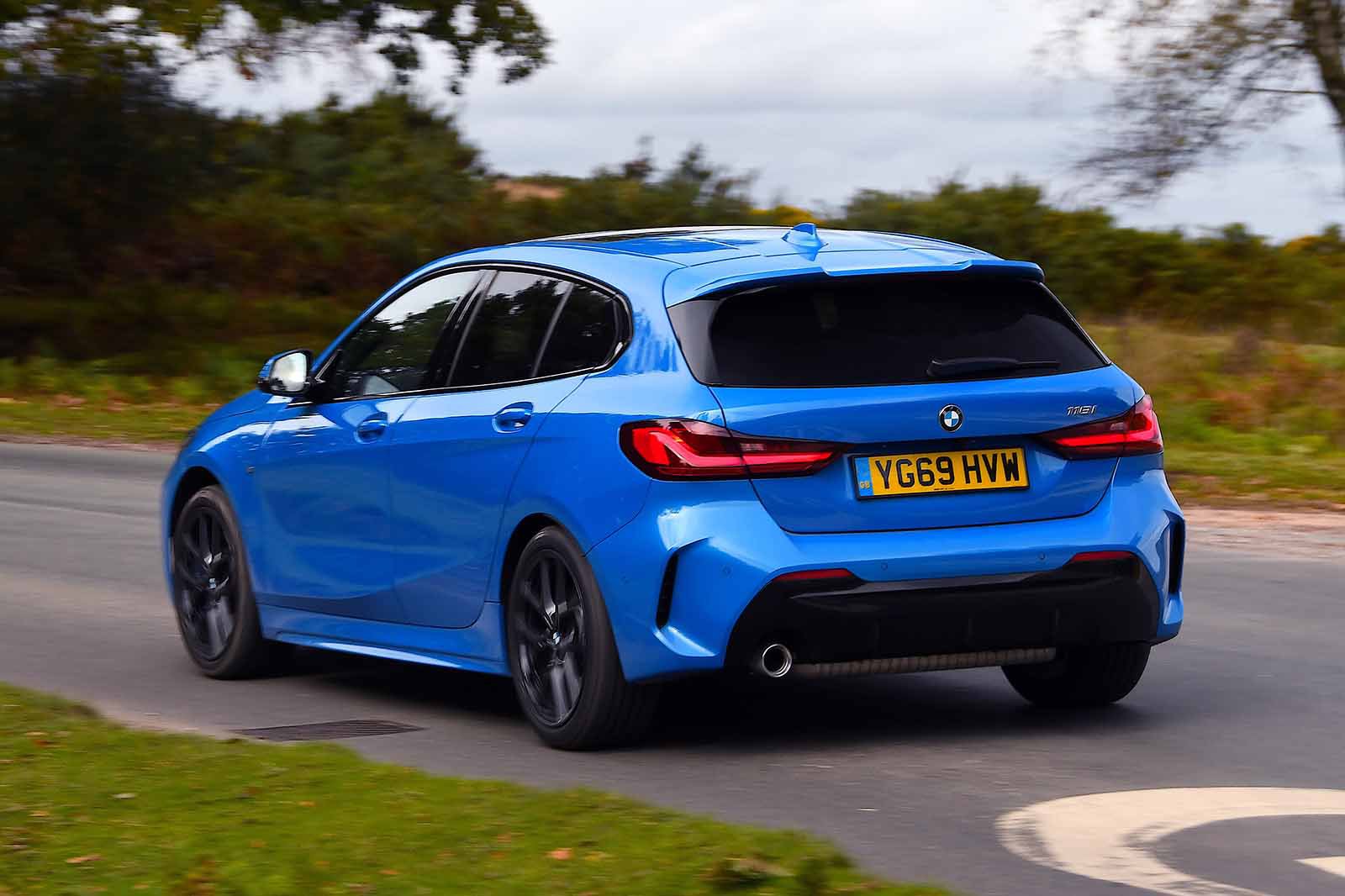 If you enjoy a sporty drive, you’ll find the front-wheel-drive 1 Series is a big improvement over the previous rear-wheel-drive models, and a sharper drive than the A-Class to boot. For starters, the 1 Series’ quicker steering gives it a livelier feel, and, because it controls its vertical body movements better on lumpier surfaces, it's that bit more stable, too.

We'd suggest going for the stiffer M Sport trim to maximise those virtues, though. Even tighter control leads to less body lean, making it feel even more agile when switching from left to right at speed. That said, some people may find the 1 Series a bit too lively, and when we tested it against the Audi A3, we felt that the latter offered more confidence-inspiring steering, a nicer handling balance and more front-end grip.

Both the 128ti and M135i hot hatches get their own bespoke steering and suspension set-ups to help keep them flatter in corners. Of course, with four-wheel drive, the M135i has amazing traction on greasy, winding roads (read about that in greater detail by clicking the link) but the front-wheel drive 128ti is the more engaging driver’s car, thanks to its more natural-feeling steering and playful chassis.

The 1 Series keeps life pretty civilised at higher speeds, just like the Audi A3. Wind noise is kept abated and the suspension is jolly quiet, even over lumpy Tarmac. The A-Class is quieter overall on motorways, though, because the 1 Series does suffer from a fair amount of road noise – especially with bigger wheels fitted.

At low speeds there’s a bit of diesel rumble in the 118d, but the fuel-saving stop-start system cuts the engine in and out very slickly in traffic. Meanwhile, the 118i petrol thrums away more pleasantly, but its stop-start is far less cultured; when combined with the automatic gearbox, the whole set-up becomes quite clunky compared with its premium petrol rivals.

You get beefier brakes as standard on the 128ti and M135i, and these can be added as an option on other models with M Sport trim. They are more progressive than the abrupt standard brakes, so it’s easier to come to a halt smoothly. And, while the 128ti is available only as an automatic, don’t be disappointed; this eight-speed gearbox is one of the best in the business, delivering crisp, seamless shifts. In fact, the same is true of the seven-speed automatics offered by other models in the range.

The CT is unrefined, uncomfortable and outdated.