More and more cars are being fitted with ‘mild hybrid’ engines. We explain how this technology works and how it can benefit you...

Hybrid power – using a combination of a combustion engine and an electric motor to improve fuel economy and reduce emissions – is now a familiar concept for many motorists, having been introduced on modern cars with the launch of the first Toyota Prius way back in 1997.

In recent years, this has evolved to include increasingly popular plug-in hybrid models that can run for longer distances solely on electric power, yet still provide the back-up of a petrol or diesel engine.

The latest variation on that theme is ‘mild hybrid’, with a wide range of car makers, including Audi, BMW, Ford, Kia and Volvo, offering models with this technology.

What is a mild hybrid system?

It's a relatively inexpensive and fairly simple technology that reduces the fuel consumption and CO2 emissions of petrol and diesel-engined cars. Generally, it involves a small electric generator that replaces the traditional starter motor and alternator (the device that keeps the 12-volt battery charged), plus a small lithium-ion battery.

Most mild hybrids run on a 48-volt electrical system – a higher voltage than the electrical systems of traditional combustion engines use. The 48v system powers components that would have previously been powered by the engine, enabling the latter operate more efficiently.

How do mild hybrids work?

As the name suggests, a mild hybrid system offers only gentle electrical assistance to the engine – not enough for the car to drive on electric power alone. The systems work in slightly different ways from brand to brand, but in general, they assist the engine under hard acceleration and help make its stop-start system smoother in operation. 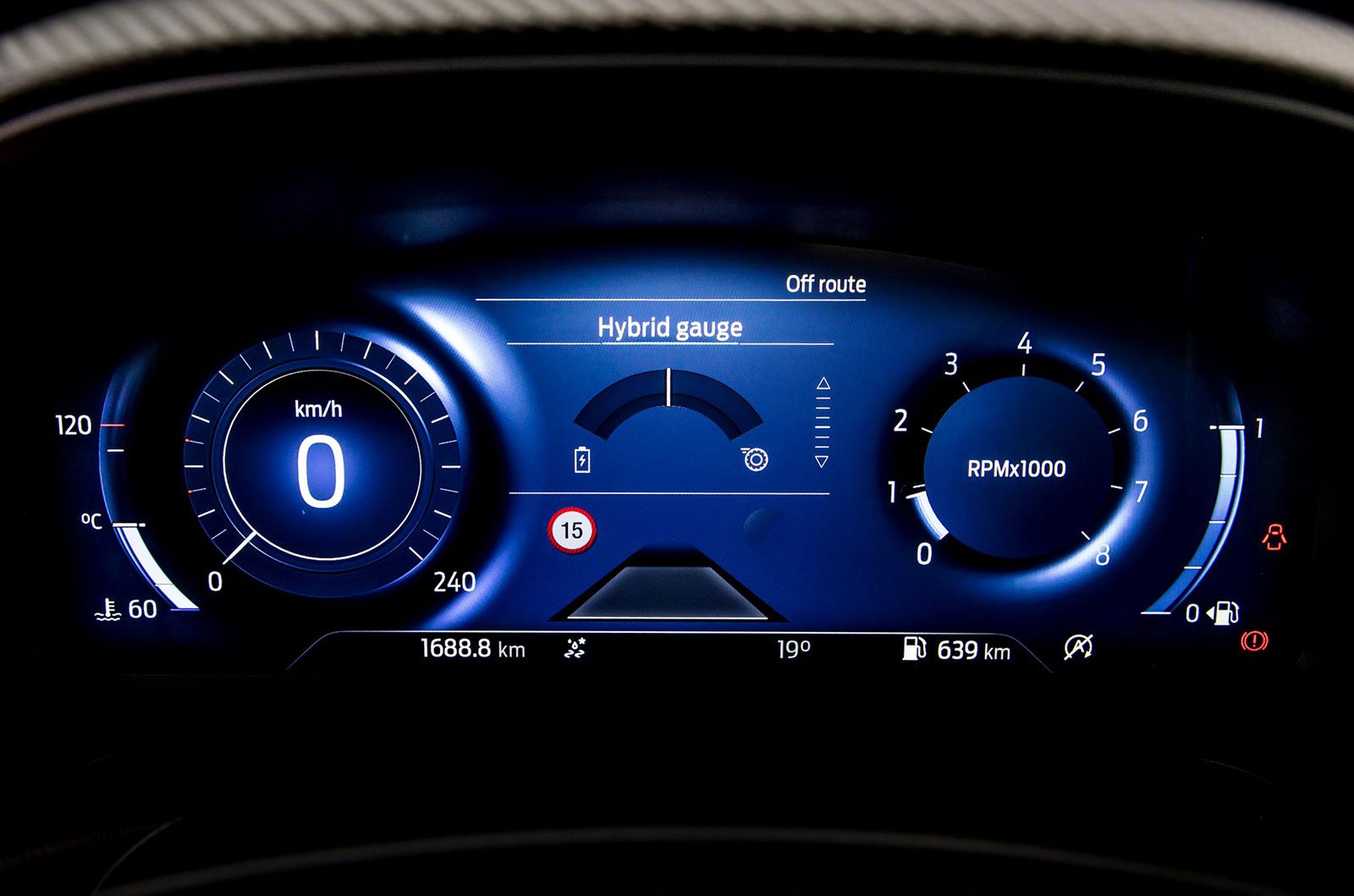 Such systems can also harvest energy when the brakes are applied, converting it into electricity that's fed to the Lithium ion battery to provide extra assistance when it's needed. On average, a car with mild hybrid technology is said to be up to 15% more efficient than its conventional counterpart.

One prime example of mild hybrid technology being used to enhance the economy and performance of a car is the Ford Puma. Most models with Ford’s 1.0-litre three-cylinder petrol engine have a mild hybrid system.

According to Ford, the system continuously monitors how the car is being driven to determine how intensively to charge the battery and when to assist the engine. The system can give the engine an extra 15lb ft of pulling power, so it doesn’t have to work as hard under normal loads, promising an improvement of up to 9% in economy. This same boost can be applied when the engine is under heavy loads to improve performance.

Are all mild hybrid systems the same? 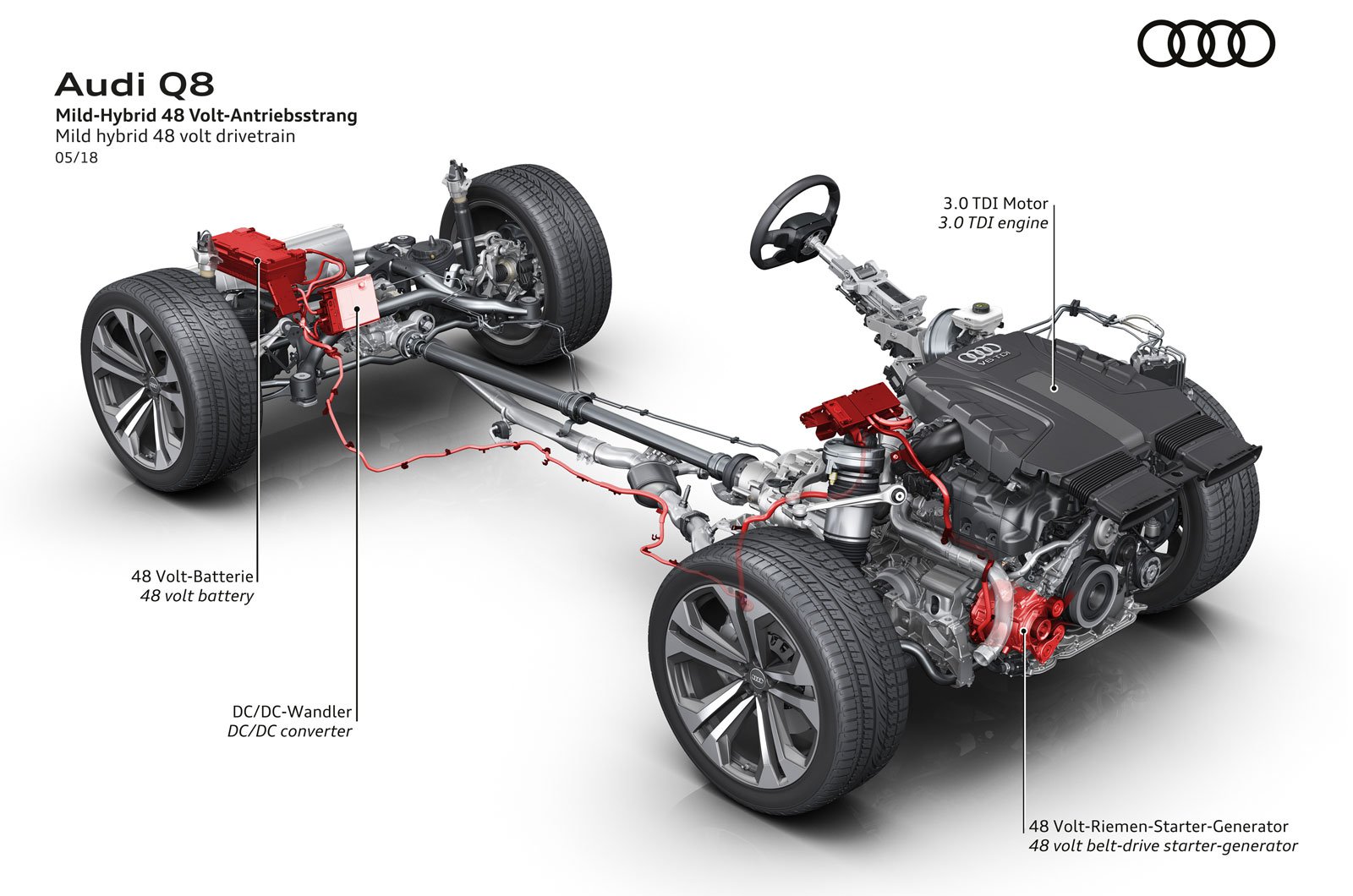 There's a wide range of mild hybrid systems, and some are more sophisticated than others. One of the cleverest is in Audi’s Q8 luxury SUV; it goes to even greater lengths to improve economy by working with the car’s adaptive cruise control system to slow it down as it approaches corners and roundabouts, reaping the energy from the regenerative braking. It can even deactivate the engine and let the car coast for up to 40 seconds at a time to save fuel.

How green are mild hybrids?

Mild hybrids aren’t as economical as many full hybrids and plug-in hybrids, and they don’t benefit from the lowest rates of company car tax. While the Puma Ecoboost 125 Hybrid’s CO2 emissions figure of 96g/km is impressive next to those of most regular small SUVs, it’s a lot higher than the plug-in hybrid Renault Captur E-Tech’s plug-in hybrid's 34g/km. And the Q8 50 TDI’s 219g/km figure may be fairly good for a diesel-powered luxury SUV, but it pales in comparison with the mere 29g/km officially produced by the plug-in hybrid BMW X5 xDrive45e. 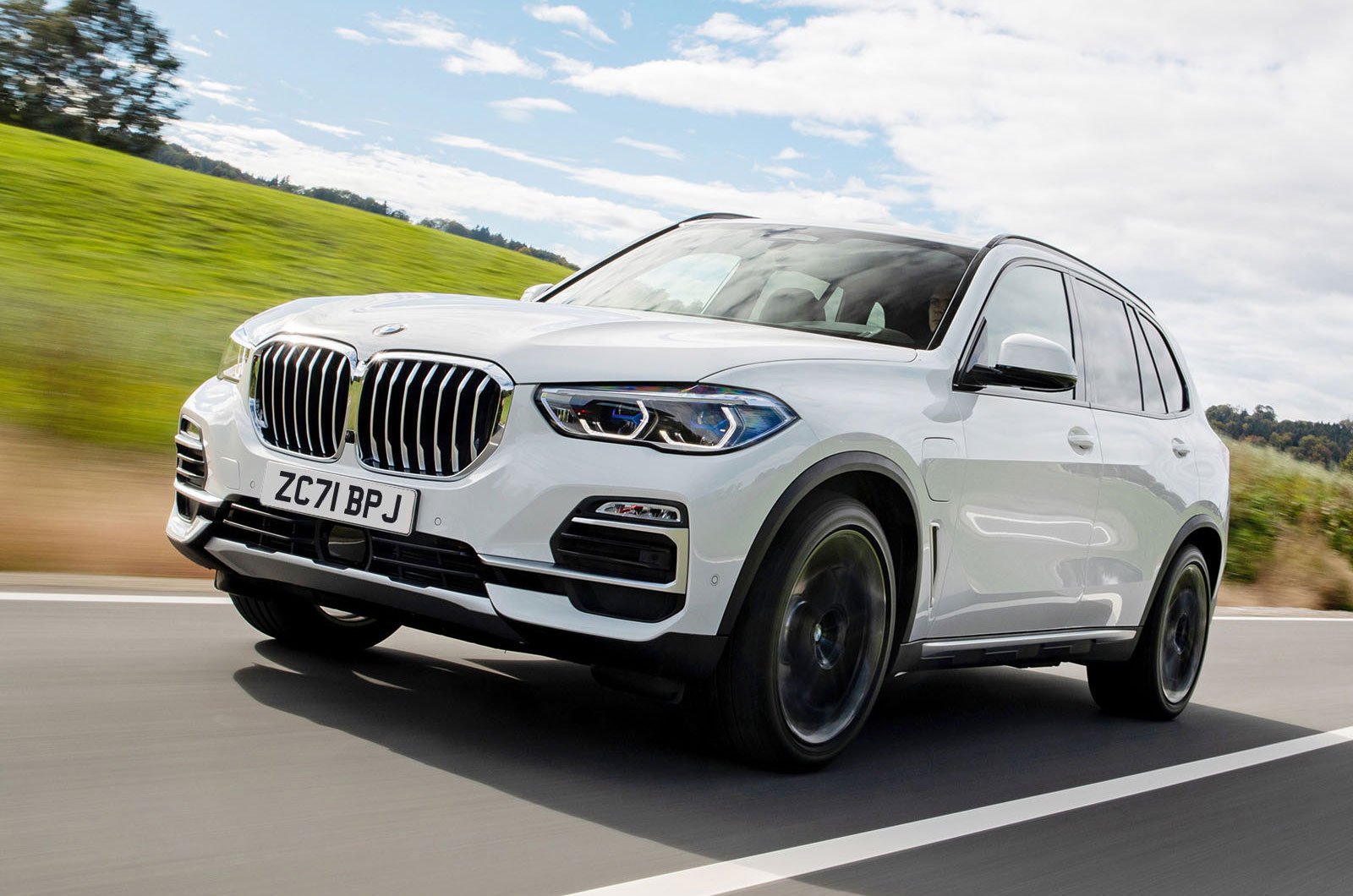 Why should you consider a car with mild hybrid power?

For a start, they’re less complex than other hybrids, so in many cases they’re cheaper to buy. They’re also easier to live with than plug-in hybrids that need to be plugged in regularly in order to gain the full benefit of them. If a plug-in hybrid is too expensive or you don’t have access to a charger, a mild hybrid is a cleaner option than a conventional petrol or diesel. They’re also no different to drive than conventional models and work with cars with manual gearboxes, so they’re a good option for those who want to stick with a more traditional driving experience.

What are the other types of hybrids?

All hybrids have a conventional engine, an electric motor and a battery, although the size and capacity of these varies. As well as mild hybrids, there are three other types of hybrids, and each works in a different way.

The Toyota Prius is the most widely known example of this type of hybrid. The car’s wheels can be powered directly by the engine, by the electric motor alone, or by both power sources working together.

When pulling away and at speeds of up to 15mph, the Prius uses only the electric motor for power, making it very frugal in city driving. The petrol engine cuts in as speed increases and under hard acceleration. 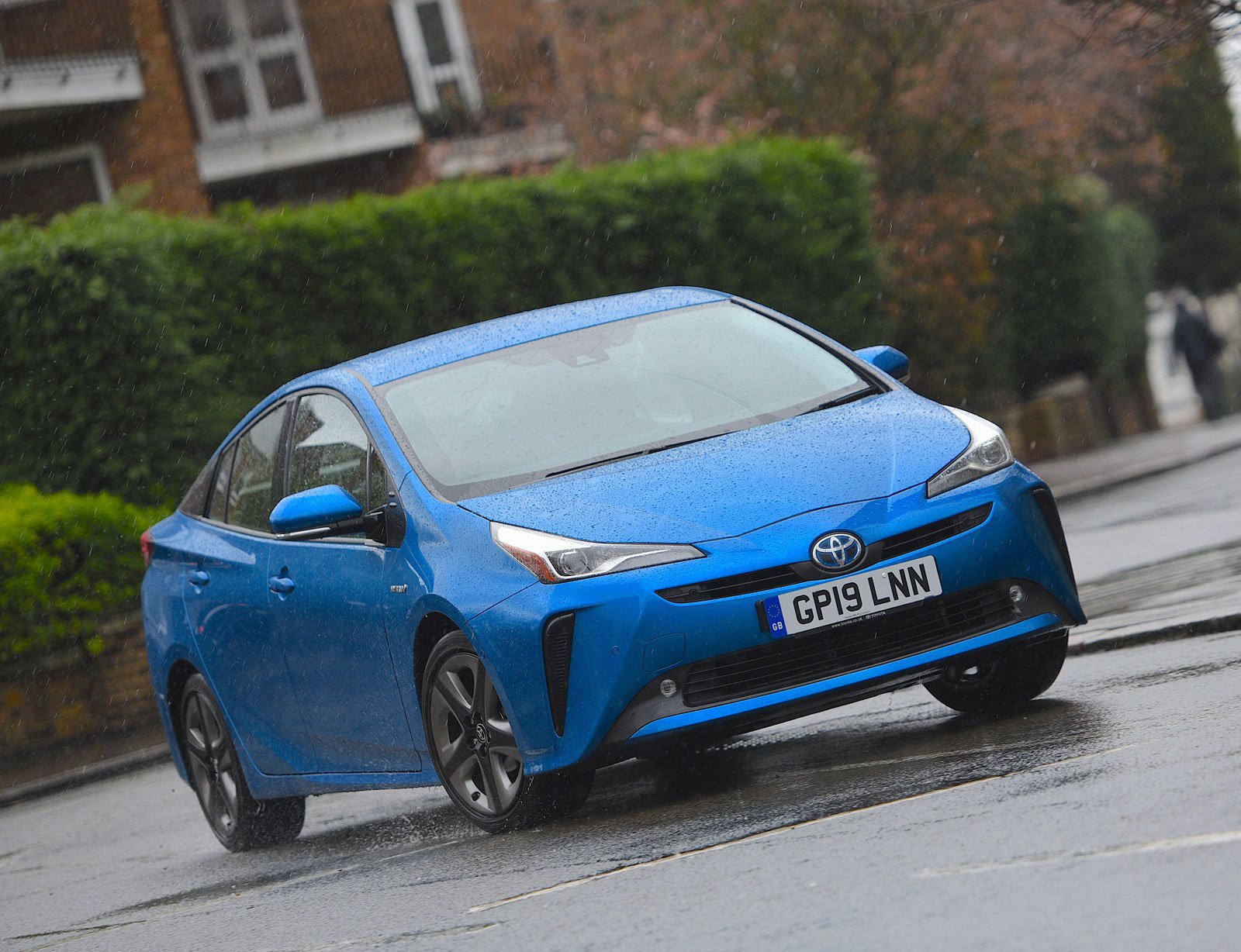 Whenever you decelerate or use the brakes, the regenerative braking system harvests electricity and stores it in the battery for use later on, but the car can run solely on electricity for only up to 1.25 miles. Toyota also uses this system in the Yaris and Corolla hatchbacks and Prius+ MPV hybrids, while models from premium sister brand Lexus work on the same basis.

Relatively rare, these differ from regular hybrids in that their combustion engines are there mainly to act as generators, producing electricity to power the electric motors, which drive the wheels. 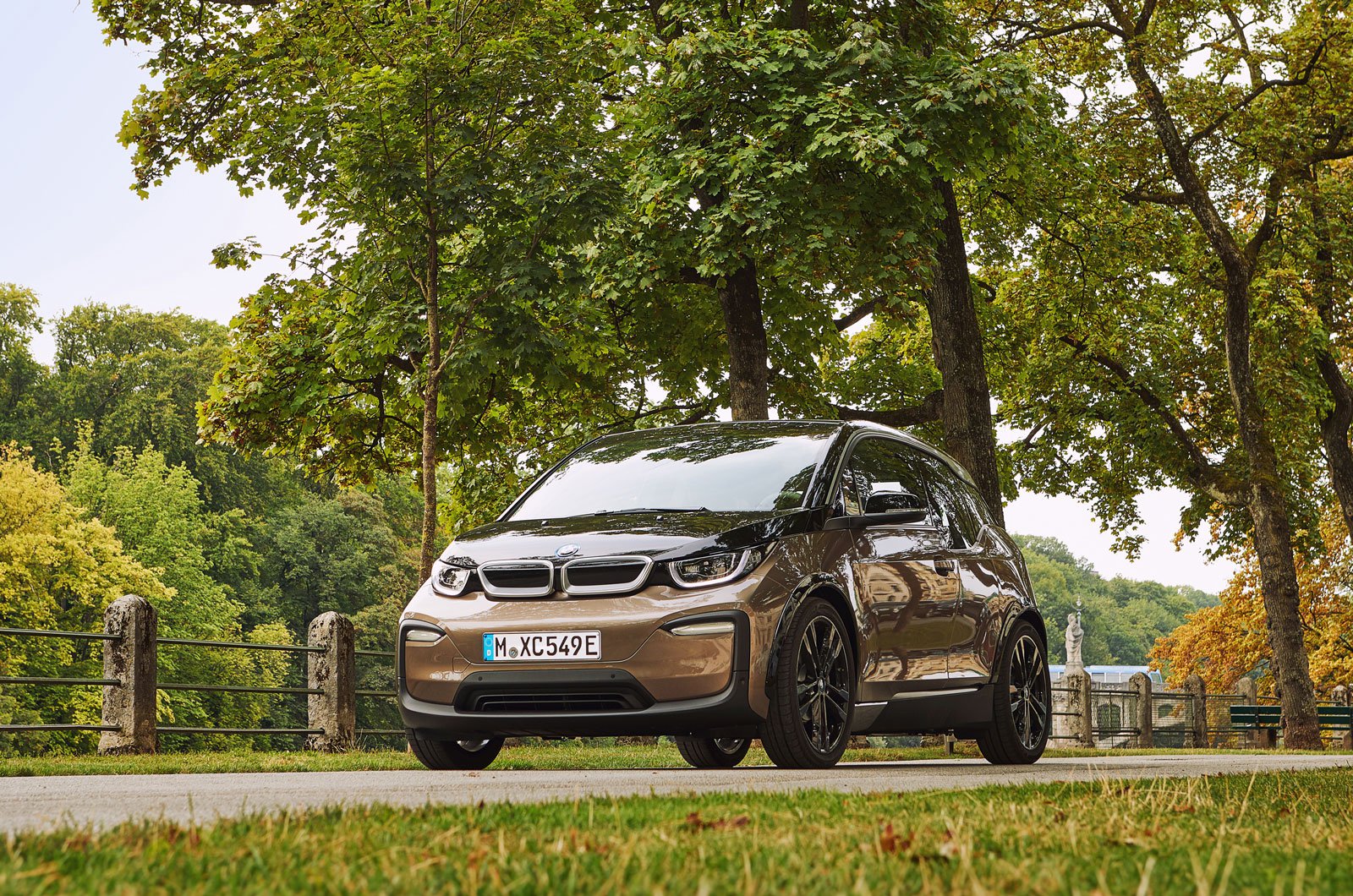 The BMW i3 Range Extender – which went out of production in 2018 and is now available only as a used buy – is one popular example. Its tiny petrol engine provides enough energy to maintain the charge in the car’s battery, adding 80 miles to the i3’s range compared with the fully electric equivalent (for a total of 205 miles).

The latest examples of range-extender hybrids include the Honda CR-V Hybrid and the e-Power version of the Nissan Qashqai. According to Nissan, the range-extender system gives the Qashqai better performance than you’d get from an equivalent parallel hybrid.

These are a halfway house between regular hybrids and full electric cars. As the name implies, they can be plugged into an electrical outlet to recharge their batteries.

Although they have conventional engines, they also have larger batteries than regular hybrids and can go farther on electric power alone, greatly reducing running costs if they’re charged regularly. Our favourite luxury SUV, the BMW X5 xDrive45e, has an official electric range of 54 miles, while the diesel-electric Mercedes-Benz GLE 350de is even better, with an official range of more than 60 miles. 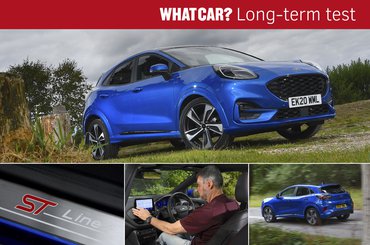