Whether you’re a fan of how the Peugeot 3008 looks or not, one thing’s for sure: the French firm has certainly tried to give its family SUV a striking appearance. It taps right into the current trend for bold styling, whereas its predecessor, a former What Car? Car of the Year, looked frumpier and more like an MPV.

A mid-life facelift also saw it adopt some design cues from the sharp-looking 208 hatchback and 2008 SUV, such as its ‘sabre-toothed’ LED daytime running lights, ‘frameless’ front grille, smoked LED tailights and model designation badging on the leading edge of the bonnet.

That update did nothing to diminish its swish interior. Indeed, the 3008 follows the style of its bigger 5008 stablemate with an avant-garde dashboard that's akin to something you might see in a motor show concept car, making those of rivals such as the Nissan Qashqai, Skoda Karoq and Seat Ateca look nondescript by comparison. What’s more, those eye-catching looks are backed up by plush materials and, in many models, ambient interior mood lighting, and set off by details that include fabric-wrapped dashboard panels and ‘piano key’ controls.

Of course, beyond the visual stimuli, the 3008 needs to be practical, cheap to run and good to drive if it’s to succeed in this extremely competitive class. Thankfully Peugeot has you covered with a range of frugal yet punchy engines – including some plug-in hybrid options. Equipment levels are pretty good too, although as you’ll find out in our review, it pays to pick your trim carefully.

So, stick with us and we'll steer you through the maze of engines, trim levels and options available. And if you fancy saving a fortune on a Peugeot 3008, or indeed any other new car, have a look at our New Car Buying service section for big savings on most new cars.

Our favourite engine in the 3008 line-up is the ‘entry-level’ 129bhp 1.2-litre petrol (badged PureTech 130). You might imagine that such a small engine would struggle to pull the 3008 along, but acceleration is more than respectable. If you’re after more poke there’s the 179bhp 1.6-litre PureTech 180. It’s rather pricey, but performance is strong, although you do need to work it harder than equivalent engines in rivals, such as the Skoda Karoq.

There’s just  one diesel available. The 1.5-litre BlueHDi 130 comes with 129bhp and a choice of manual or automatic gearboxes. It’s a flexible engine that pulls the car along effortlessly, albeit not particularly quickly, even when the interior is fully loaded with people and bags.

Both of the plug-in hybrid versions have an eight-speed automatic gearbox. The one named simply Hybrid is front-wheel drive and offers 222bhp, while the Hybrid4 300 adds a second electric motor to power the rear wheels, taking total power up to 296bhp – enough for a claimed 0-62 time of 6.1 seconds. The standard Hybrid is quite a bit slower with 0-62mph time of 8.9 seconds, plus there’s a bit of a delay between putting your foot down and it really starting to pick up speed on the move. And while its claimed all-electric range is only one mile short of the Hybrid4 at 39 miles (WLTP) (expect a figure closer to 25 miles in real-world driving conditions), this has some serious tax implications for company car buyers (more on this later).

The standard suspension is, on the whole, pretty good for comfort. It takes the edge off ridges and expansion joints that the firmer-riding Seat Ateca would tend to thump over – although you'll still get a hefty jolt if you strike a particularly vicious pothole. Overall, the rival Karoq is a more comfortable alternative.

Big wheels often ruin ride comfort but that isn't the case here; go for 19in alloys and the 3008 is still pretty agreeable. However, the Grip Control package does have an adverse impact on smoothness. It includes all-weather tyres with stiffer, less absorbent sidewalls that make the ride more restless.

The plug-in hybrids, meanwhile, are considerably heavier than other versions of the 3008, and, although this extra weight is carried by a more sophisticated rear suspension set-up, a regular 3008 is still cushier – passengers will find themselves swaying in their seats more over uneven road surfaces, for example. 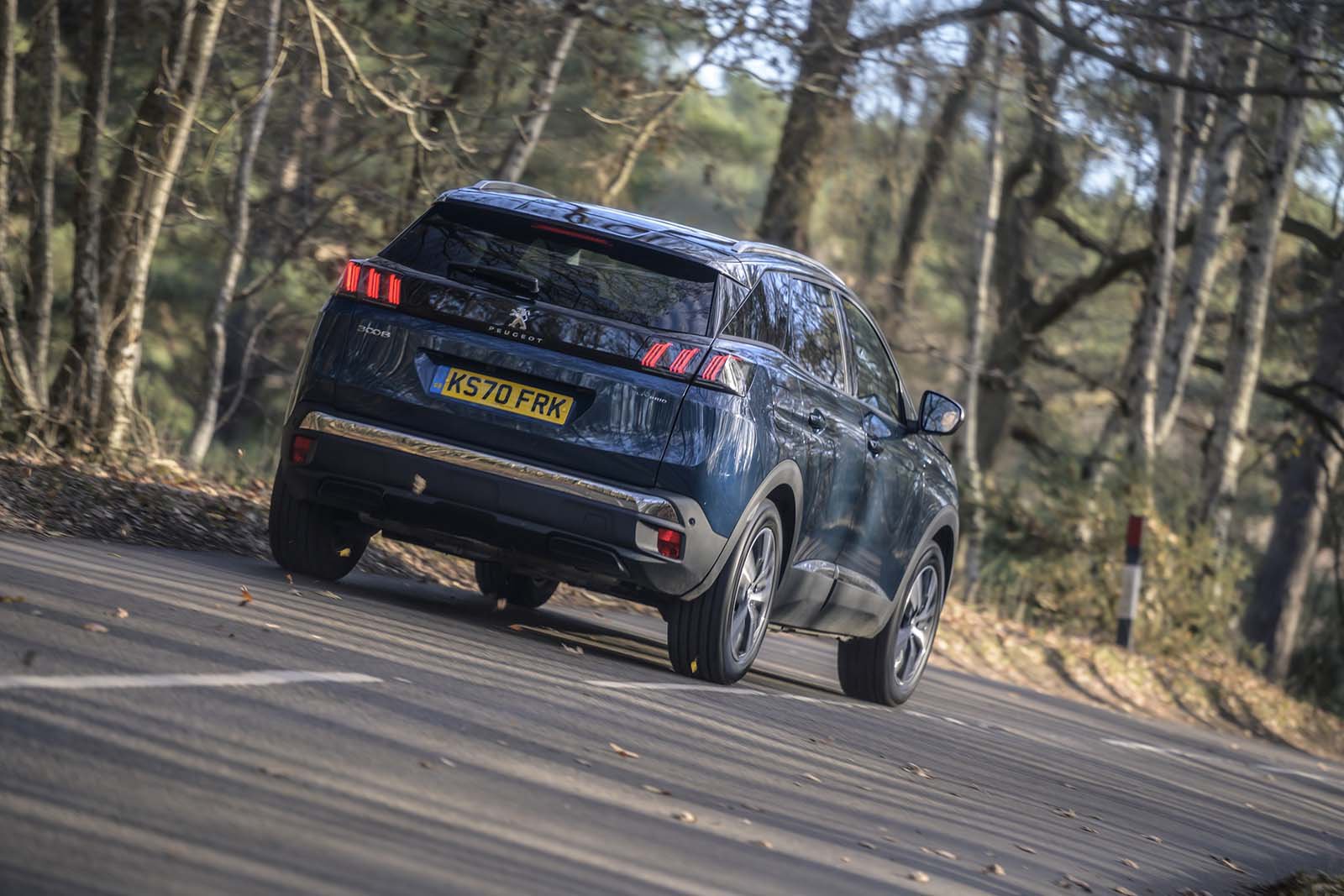 Although SUVs are never as agile as conventional hatchbacks, some are still surprisingly good fun to drive. Unfortunately, the 3008 isn't one of them. There's noticeable body lean through tight twists and turns, plus the nose pitches downwards under heavy braking. Don't go thinking it's a wallowy barge though, because it isn't, and it grips the road well enough.

Both the Seat Ateca and Skoda Karoq are more agile and more enjoyable to drive along a winding road, with steering that provides more sensation and serves to give you more confidence. The 3008's light steering is great when you're manoeuvring, though.

The considerable extra weight of the hybrids’ batteries leads is felt in increased body lean, and this and makes them feel less agile through quick changes of direction. So despite the Hybrid4 having plenty of power and impressive traction out of tight bends thanks to its four-wheel drive system, you’re unlikely to have any more fun than you would in a regular 3008.

The 1.2 PureTech petrol engine is very smooth and quiet, and the 1.5 HDi diesel isn’t far behind, with just a little bit more grittiness and vibration.

Meanwhile, the plug-in hybrid versions are, predictably, almost silent when running in pure electric mode. However, the transition between electric and petrol power isn’t always seamless – especially when you ask for a quick burst of acceleration. And when the petrol engine does fire into life, it makes itself heard, sounding particularly gruff when worked hard.

You’ll also notice some wind noise from around the door mirrors at motorway speeds, along with some tyre noise – especially in versions with 19in alloys. Overall, the Skoda Karoq and Seat Ateca are more refined family SUVs.

Classy, comfortable and great for safety. And a former Wh...