The Toyota C-HR occupies a slot in the Japanese firm's line-up which has gone unfilled for a surprisingly long time. You see, it actually corresponds in size with the Nissan Qashqai, a car that gets all the plaudits for kicking off the family SUV craze. That's a bit unfair, really – Toyota arguably did just that over a decade earlier with the original RAV4.

However the Toyota RAV4 has grown and grown over the years and, these days, is quite a large and expensive beast. In effect, the C-HR fills the shoes handed down by the RAV4 as it has evolved, and competes with family SUVs such as the Skoda Karoq, Seat Ateca and aforementioned Nissan Qashqai, even if its dramatic styling is more akin to the altogether smaller Nissan Juke.

Those distinctive looks don't do wonders for practicality, as we'll come on to explain in detail later, but, without giving too much away, there are plenty more reasons you might decide to buy a C-HR, not least its impressive driving manners.

If you're a company car driver, though, perhaps the biggest draw of the C-HR is the availability of a hybrid version which pumps out less CO2 than the vast majority of rivals, bringing surprisingly low monthly tax bills. Official fuel economy is also better than many diesel rivals, and you get lots of equipment as standard – even on the cheaper trim levels.

Read on over the next few pages and we'll tell you how the C-HR squares up against its main rivals in all the important areas, and we'll also tell which engines and trims make the most sense and which options you might want to consider stumping up for.

And if you decide the Toyota C-HR is the car for you, don't forget to check out our New Car Buying section to see how much you could save on the brochure price. 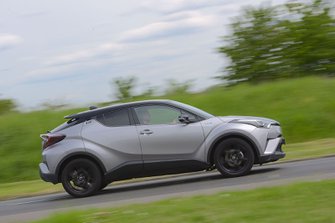 The Mercedes GLA looks good – both inside and out – but rivals...

One of the best small SUVs; great to drive and classy inside