Baby named after car she was born in 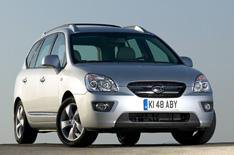 A baby girl has been named after her birthplace; not a glamorous foreign location such as Paris, India or Brooklyn, but a seven-seat MPV.

Mum Samantha Smyth and dad Tony Richardson had planned to call their little girl Tilley, but after her arrival in the back of the Kia Carens, decided to change the name to Kia.

Samantha's mother collected the couple from home at 2am on Sunday, and on arrival at Poole Hospital at about 4.30am, Samantha said she could feel the baby's head.

Kia was born before they could get into the hospital, two weeks early and weighing 6lbs and 7oz, but Samantha said it was the best birth she had experienced.

Samantha told the Bournemouth Daily Echo: 'I don't think we would have used Volkswagen or Citroen.'

A Kia spokeswoman said: 'It's very exciting news, and proves the Kia Carens is a family car right from the off!'

Kia's fabulous welcome gift
Not missing an opportunity, when Kia Motors heard the news, the company offered the family a brand-new top-of-the-range Kia Carens worth 17,995.

Happy mum Samantha said: 'I'm just so chuffed, I can't believe it. At the moment we only have a four-seat car so this will mean we can get the family about in comfort. Thank you to Kia for arriving and to Kia for the car.'

Deal of the day: Kia Carens

Our cars: Carens, Qashqai and i10