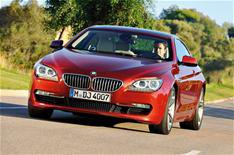 What is it? The upmarket two-door is set to follow the recently introduced second-generation 6 Series Cabriolet into UK showrooms in September. The model tested the entry-level 640i, priced at 59,550 will cost 4145 more than the previous entry-level model, the old 630i.

It isn't the last of the new 6 Series models to arrive, either. BMW is also planning to launch a four-door derivative to rival the Audi A7 and Mercedes-Benz CLS.

The new 6 Series is based on the same underpinnings as the latest 5 Series. Among its long list of options aimed at raising its dynamic appeal are a rear-wheel-steering system called Integral Active Steering, and Dynamic Damper Control.

As with the open-top, the new coupe comes with the choice of two turbocharged direct-injection petrol engines and one turbocharged common-rail diesel engine.

The sole diesel is a 308bhp 3.0-litre. All engines come mated to a standard eight-speed automatic gearbox.

As part of an effort to improve the 6 Series' fuel consumption, the new model also receives automatic engine stop-start, brake-energy recuperation, aerodynamic enhancing flaps behind the grille, and energy-saving functions such as on-demand oil and water pumps, that draw power only when required rather than continuously as with the previous model.

What's it like to drive? The new 6 Series coupe is a highly competent car so competent, in fact, that it can seem a little clinical at times.

Look beyond this, though, and you discover a car that is capable of devouring large distances with ease in the very best grand tourer tradition.

The 6 Series is best on the motorway, where it cruises serenely with impressive refinement.

The new 6 Series is a good deal sharper and more responsive than before. The electro-mechanical steering, with BMW's variable-assist Integral Active Steer set-up as optional, gives the 640i astonishing agility for such a big and heavy car.

Despite the weight, it carves through corners, even at high speeds, in a flat and unflustered manner, relying on the abundance of grip to ensure the driver rarely needs to correct the line. With the Dynamic Damper Control providing continuously adjustment of the stiffness of the car's suspension, it also rides in a firm but well controlled manner.

What's it like inside? BMW's designers have placed a great deal of effort into lifting the appeal of the 6 Series Coupe's cabin. The new model has a stylish dashboard sporting an extra-wide centre console along with the latest version of BMW's iDrive system. It also gets and the same classy controls as found in the latest 5 Series.

The new 6 Series is longer and wider, so offers more room than the previous 6 Series up front. A 75mm stretch in the wheelbase has also liberated extra space in the back, although the individual rear seats are still best suited to children. At the same time, boot capacity increases by a scant 10 litres to 460 litres.

Should I buy one? No doubt about it, the 640i is an impressive machine from its high level of quality, through to its elegant new styling, eager performance, impeccable handling, firm but resolute ride and improved everyday practicality. It's also a more rounded rival to two-door coupe rivals such as the Mercedes-Benz E-class Coupe and Jaguar XK than the second-generation model.

However, it misses out on the engagement of true sports car such as the Aston Martin Vantage and Porsche 911. Think of it more as a grand tourer and you'll be on the right track.