* Seven-seat Orlando MPV to be unveiled on September 30 * Will offer buyers a choice of three engines and four trims * Due to go on sale in early 2011... 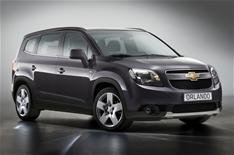 Chevrolet will unveil the production version of its Orlando MPV at the Paris Motor Show next month.

This will be Chevrolet's first MPV in Europe and is based on the existing Cruze saloon. The Orlando is a seven-seat MPV that wears the now-familiar company 'face' and has hints of crossover in its design.

The cabin has what the company calls a 'dual cockpit', inspired by that in the Corvette sports car, and featuring blue backlighting on the centre console.

The seven seats are arranged in three rows, with each row higher than the one in front to give occupants a good view out, and Chevrolet says there will be a wide variety of seating permutations.

There will be plenty of storage spaces throughout the car, including cubbies in the centre console, doors, boot and roof. There's also one hidden behind the face of the audio system, which flips up to reveal a USB port and enough space for an MP3 player, sunglasses or a wallet.

Engine line-up
The car will to go on sale in the UK early next year, and buyers will be able to choose from three engines: a 139bhp 1.8-litre petrol unit and two versions of a 2.0-litre diesel, with either 129- or 161bhp.

There will also be four trim levels, but standard equipment across the range will include electronic stability control, six airbags, air-conditioning and electrically heated and adjustable door mirrors.

Chevrolet will also unveil an updated Cruze, and new Aveo supermini and a revised Captiva 4x4 at the Paris motor show.